January 2022 is starting out as one of the worst months for the market in some time. What’s Next?

J.P. Morgan was once asked by a naïve acquaintance as to what he thought the market would do. “It will fluctuate,” the revered Mr. Morgan replied. People also ask me this question all the time, and I usually respond that if I knew the answer to that question, we probably wouldn’t be talking, because I would have purchased my own tropical island years ago.

No one knows for sure what the markets are going to do, and if someone says that they do, they are flat out lying. However, we can often look into the past and see how markets have performed under similar circumstances to what we are currently experiencing. Of course, this is far from perfect, but it can shed some light on the potential direction of the markets going forward.

As I discussed last week, the worries that many market participants have been wringing their hands for the last couple of years finally seem to mean something to the markets. High inflation, expensive stock valuations, rising interest rates, geopolitical worries, etc. finally seem to be putting a damper on the market, and as you most certainly are aware have made January 2022 one of the worst months we have had in a long time, not only for stocks, but bonds as well. There have not been a lot of places to hide and if you think sitting in cash is good, well, that is effectively losing 7% a year in purchasing power due to inflation.

Let’s talk about where we are and what has happened so far and what has occurred in the past under similar circumstances. Of course, every circumstance is different, but with regards to a correction this large from all-time stock market highs. From January 4th, the S&P 500 has fallen close to 10%. A monthly decline of this magnitude has occurred 15 times in the last 50 years; and of those 15 times, 11 have occurred during recessions. We are not in a recession and our proprietary recession model currently forecasts a 4.3% probability of recession in the next 18 months (that is extremely low). Therefore, we don’t think this is the start of the next major bear market.

Stock market corrections are nothing out of the ordinary. Looking back at the history of the S&P 500 index since 1928, which is as far back as our data goes, we find that the average calendar year drawdown was -15.7%. Moreover, the chance of the market experiencing a drawdown deeper than 10% in any one calendar year was roughly 60%, while the chance of a drawdown deeper than 5% was higher than 90%. A fairly common occurrence indeed. On a more positive note, following such declines, the average recovery from the low point through the end of the year was +18.6%, which implies that the market on average tends to recover fully by year end. 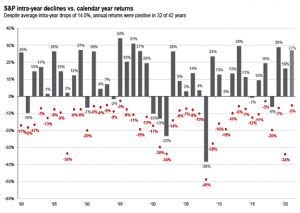 From a timing standpoint, on average the S&P 500 index tends to experience a 10% correction every 170 trading days (roughly 8 months). Once again, not a rare occurrence historically. As of a few days ago, the S&P 500 had gone over 450 trading days (roughly 21 months) without experiencing a 10% correction, with the most recent one having occurred in March 2020 (September 2020 was a near miss). As such, one might say we are statistically due for one.

In the past 70 years there have been only 7 observations (including now) in which the equity market corrected -10% in less than one month from an All Time High (We hit an all-time high in the S & P 500 on Jan 4th this year). Below is a summary of those observations 3 months, 6 months, and 12 months from their occurrence. The other six times the market fell at least -10% from an All Time High, the market had recovered an average of +14.7% over the next six months. History says these instances are rare but things do recover and often recover quickly. Data and history can be useful things to look at when markets get volatile as they are now. History may not repeat but it does rhyme and can give us some possible perspective as to where things may lead. 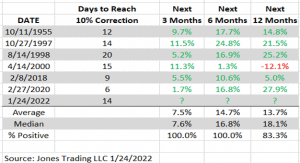 Now, could we be in the early stages of a much larger correction? Certainly. As I said earlier, no one knows for certain where the markets are going to go in the near term, although we have a pretty good idea over the longer term that they do go up and to the right. Remember, about 3 out of every 4 years, the stock market is positive, which means on average, 1 out of every 4 years is a down year.

A couple of other observations, the 2nd year in the Presidential cycle (which 2022 is for President Biden) is usually the worst of the 4 year presidential cycle for a number of reasons. Remember 2018 was Trump’s 2nd year and that was also the last down year for the S & P 500, Hmmm.

There are a lot of indications that 2022 is going to be a challenging year for investors, but it also leads me to another quote I like a lot from Jason Zweig of the Wall Street Journal who wrote back in 2011 “If you can control it, fear is the best fertilizer for future bull markets.”