The 1st half of 2021 was a heck of a lot less eventful than the first half of 2020. As we all vividly remember last year with the COVID crash of February and March when the S & P 500 dropped nearly 35% in a month. 2021 by comparison has been a much more uneventful year so far as the stock market continues to inch ever higher and continue to make record highs. The biggest drop in the S&P 500 in 2021 has been a little less than 5% which occurred in early May and which most people probably didn’t even notice. 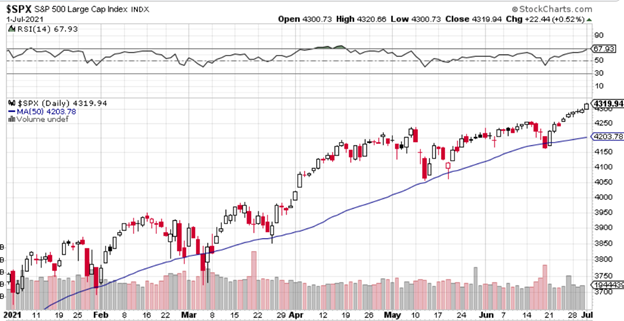 It has been a really good first half of the year for stocks, not so much for bonds which are having only their 4th losing year since 1977, as interest rates shot up quickly in the first 3 months of the year but have gradually decreased since then. Since the prices of bonds move inversely to interest rates, as rates rise, bond prices fall, and the Aggregate Bond Index is actually down about 1.6% so far this year.

It is probably a lot to ask to expect the 2nd half of the year to be as docile as the first half of the year, so let’s look at some things that we will need to keep an eye on the remainder of the year that could upset the applecart a bit and could be the catalyst for stock and bond market corrections. And remember, that corrections in the markets can be a good thing for long-term investors as they can reduce the speculation and euphoria in the markets that can lead to bubbles.

Inflation – As I discussed last month inflation has reared its head again after being very tame for the last 15 years or so. The million-dollar question will be if it is a short-term issue from coming off very depressed levels during the heights of the COVID crisis last year, or if we are entering a longer term trend of higher inflation. Currently, there aren’t any signs that it is slowing down, so we may be dealing with higher inflation for some time yet.

Language From the Federal Reserve – Jerome Powell (Chair of the Federal Reserve) and the governors of the Federal Reserve will be in the spotlight as the markets parse every word of their press releases and speeches, they give over the 2nd half of the year. Investors will be looking for when they might start raising interest rates to cool the economy and keep inflation in check. Once there are clearer signals from the Federal Reserve as to a timetable for raising rates and scaling back some of the other things they are doing to help ensure the economy continues on track coming out of the COVID recession, there is a very good chance there could be some indigestion in both the stock and bond markets. Most likely, the annual Jackson Hole Economic Symposium the Fed has near Labor Day could be when this is unveiled.

Elevated Stock Valuations – After the impressive run the stock market has had coming out of the COVID crash, the valuations are getting a bit stretched and by many metrics the stock market looks very expensive. This doesn’t mean the market has to crash or even go down, but it is something to watch, as high market valuations generally lead to lower forward market returns. But, as you can see in the chart below, market valuations are definitely getting stretched. 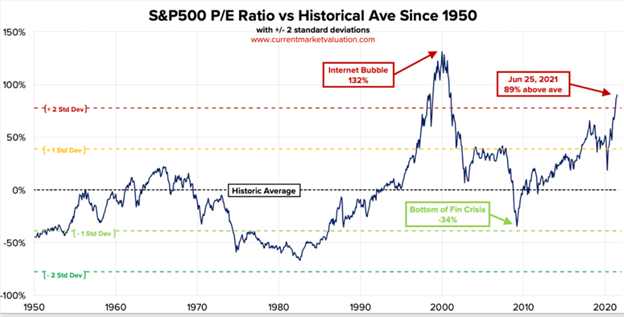 Biden’s Tax Proposals – Will President Biden’s tax proposals get passed and we see higher income tax and capital gains rates for higher income taxpayers as well as higher corporate taxes?  Obviously, markets are not going to like higher taxes, so if this legislation does pass, there is a good chance the market will not react positively to this.

Rising Oil Prices – Oil prices have recently touched $75 a barrel as rising demand from consumers coming out of quarantine is boosting the price of oil and major oil producers are debating about whether to increase production. Oil prices are threatening to reach prices they have not reached in about 7 or 8 years. High oil prices can put a lid on the growth of the economy as gas at $3.50 to $4 a gallon is quite a shock when we are used to paying much less the last few years.

Used Car Prices – Used car prices have been on a tear the last year as new cars have been hard to come by due to a computer chip shortage and surging demand as our lives get back to normal coming out of the last year of quarantine. Many used cars and trucks have risen by over 30% in the past year and some data suggests the increase may be closer to 50% year over year. This is contributing to overall inflation so until more supply comes onto the market (which probably won’t happen until the chip shortage resolves itself) this will likely be a big driver of overall inflation.

Of course, these are all the known potential catalysts and to a certain extent the market is already discounting a lot of the above issues. It is the unknown issues that could likely cause the next correction. Since they are unknown, it could be anything, such as a military conflict, terrorist attack, large hedge fund blowing up, or a turn for the worse with the COVID pandemic or what if a totally different pandemic hits, who knows?

No matter, there is always going to be market corrections and dicey times for investors, but if we focus on the long-term, these end up being bumps in the road, especially if we have a plan and appropriate asset allocation in place. At least we can hope that if any of these issues crop up that they wait until summer is over, so we can all enjoy a peaceful summer vacation season.