Just like that scene in the movie “Anchorman” when Ron Burgundy declared “Well, that sure escalated quickly”, after the big melee with the other Action News Teams in the San Diego area, the action in the markets sure has escalated. Today, the markets dropped another 7.5% or over 2,000 Dow points as COVID-19 (which is what the coronavirus is being referred to now) fears continued and Saudi Arabia started a price war over the weekend with Russia that caused oil prices to drop about 30% in a day. The biggest one day drop since the Gulf War.

The drop in oil sent waves through the markets because a lot of high yield or “junk” bonds reside with oil and energy companies and this escalated worries that there will be defaults of a bunch of the U.S. shale & fracking companies that cannot operate with oil at $30 a barrel which is near to where it is now. It was trading in the mid $60’s a barrel at the start of this year. 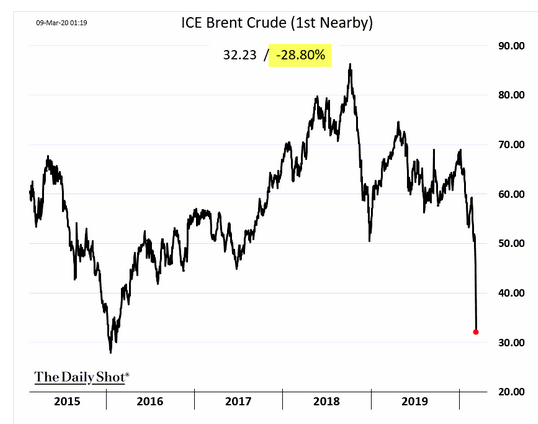 Ordinarily, this might not be a bad thing, since it reduces costs to consumers and can function similar to a tax cut, but with things already slowing down due to the virus, it occurs at a very inopportune time and the markets reacted as one would expect.

Stock markets are off about 18% from the highs of just a couple weeks ago, but most bonds are up, which helps absorb some of the losses from stocks but not all of them. Markets hate uncertainty and we certainly have it with COVID-19 and what the ramifications will be for not only our health but especially for the economy.

Things are so stretched to the downside, that the whiff of any good news is probably going to inspire a real “face-ripping” rally. Also, if the world’s central banks coordinate their efforts with monetary policy, and the U.S. government can embark on generous fiscal policy, a monster rally could ensue as well.

Mohamed El-Erian is chief economist at Allianz, the big insurance and investment company and who I believe is one of the smartest people in the investment world. When he speaks, (much like E.F. Hutton in the old commercials), I listen. He wrote the following today:

Another very well respected person in our industry, Barry Ritholz, wrote the following on his blog today:

This is not 2008-09: I have discussed the many things that led up to the Great Financial Crisis (GFC) but the key is the debacle began within the structure of finance itself. Securitized loans were everywhere, as were derivatives. Even worse, there was a direct feedback mechanism between the economy (e.g., real estate) and finance (e.g., mortgages). That tight relationship ensured that credit, finance, market structure, economics, employment and GDP all were closely tied together. While the supply chain is global and the nature of modern economies are interlinked, we don’t see anything remotely systemic this go around.

Economy: The economy is slowing, likely temporarily, but perhaps significantly, as people hunker down, work from home and go out less as they wait out for the economic impact to pass. Stocks are appropriately pricing this in. The assumption is energy, travel, leisure, dining, retail and business travel sectors will all suffer large fall offs in revenue and corresponding decreases in profits. Historically, pandemics should be transitory, lasting weeks or months but likely not years. Knowing this should help you put the moment into this a bigger picture.

Yes, this has been a scary last couple of weeks, and we probably have a rough ride for the next few weeks, until we do get more certainty. We are all in this together, but there is no reason to believe that the country and world will not persevere and come out of this stronger. Sure, economic output is going to be dismal for the next few weeks/months, but that is also going to lead to an enormous amount of demand on the other side of all of this. And with bond interest rates so low (The 10 Year Treasury Bond now yields about 0.50%) there will likely be a lot of money flowing into stocks. Even the 30 Year Treasury Bond now yields less than 1%. These are the lowest interest rates in the history of the U.S.!

Ironically, today, March 9th, is the 11th anniversary of the bear market low in 2009. That was a Monday as well.

I plan to continue to give updates and write as much as I am able to keep friends and clients informed. I am also here to talk if needed.