It seems like every year, just days before the ball drops in Times Square, Congress passes and the President signs new legislation that affects taxpayers. This year was no different as the SECURE Act, which contains some significant changes in certain retirement accounts was passed on December 19th, and signed into law last Friday by President Trump. Of course this probably could have been accomplished months ago as  I wrote about this bill back in May, but we all know how Congress operates. Frankly, I think it is amazing that any legislation gets passed at all because things are so divided and the parties so polarized, but this bill actually had broad bi-partisan support and was attached to a year-end appropriations bill that had to be passed by Congress to keep our government up and running. Of course, it did have a strong push by the insurance industry lobby which undoubtedly helped it’s prospects, as there are some key items in here that they are excited about which likely means that it may not be so great for consumers, but more on that later.

The SECURE Act stands for Setting Every Community Up for Retirement Enhancement Act and it provides some substantial changes to how IRAs, 401(k) plans and other retirement accounts are treated. You may have already seen some attention-grabbing headlines that makes you feel like Armageddon is coming, but in reality, the SECURE Act is not all that scary and actually contains some very beneficial provisions for many people. True, there are some substantial changes in how IRAs and 401(k) plans treat beneficiaries, but it is not really going to change things much for those currently drawing on their retirement accounts, or for those whom will be in the near future.

First, it is in no way as broad and sweeping as the major tax law changes passed at the end of 2017, known as the Tax Cuts and Jobs Act, or TCJA if you want to sound cool. I am going to focus on the key provisions of this new tax law that will most affect the people we work with in some way. However, if you really want to get into the weeds on this (and I am going to recommend only doing this if you have severe insomnia or are a glutton for punishment) you can get all the details here or here. 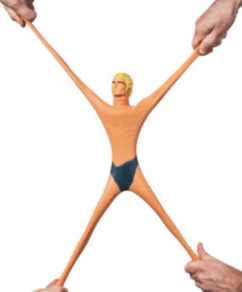 Elimination of the “Stretch” Provision for Non-Spouse IRA Beneficiaries

This is probably the section of the SECURE Act that will have the greatest effect on retirement plans as we know them. The “Stretch” provision refers to the ability of a person to name their children, grandchildren (or other non-spouse) as beneficiaries of their IRA, 401(k) or other retirement account (usually after naming their spouse) and allow that person to take the money out of that account over their lifetime. Under the existing tax laws, this can result in younger non-spouse beneficiaries spreading out the money inherited from an IRA over many years. For example, if a child inherits an IRA from his parent at age 38, they can “stretch” taking the money out of that IRA for 45 years.

Under the new SECURE Act, a non-spouse beneficiary will be required to empty that IRA account out by the end of the 10th year after inheriting it. It doesn’t matter if they take it out evenly each year or all in the 10th year, it just needs to be emptied out by December 31st of the 10th year after it was inherited. (The IRS wants their cut!) Of course, if you are a beneficiary you would need to consider some serious tax planning to try to find the optimal way to take those funds out over those 10 years. This will also apply to Roth IRAs, but at least the distributions from Roth’s are always tax free.

Let me be clear on a couple of things. First, this in no way affects a spouse inheriting a retirement account. They can still claim the account as their own, and use their own life expectancy to take required distributions, there is no 10 year rule to contend with for the surviving spouse. It would only come into play when the surviving spouse passes away and the money goes to their beneficiaries.

Second, anyone currently utilizing the “stretch” provision is grandfathered under the old laws mentioned above. The SECURE Act provisions do not take effect until January 1, 2020. The old laws are still in effect for anyone that passes away prior to January 1st.

One other thing to note is that the 10 year rule does not apply to minor children until they reach the age of majority in the state they live in. (In Illinois that is 18). For example a 10 year old inheriting an IRA from their mother would use the life expectancy table for a 10 year old in the year they inherit until they are the age of majority. Once they are no longer a minor, the 10 year rule kicks in. As mentioned above it does not apply to spouses either. A couple other exceptions are disabled beneficiaries, chronically ill beneficiaries or those less than 10 years younger than the decedent.

Finally, it is also worth noting that having a trust as IRA beneficiary will not let you skirt the new 10 year rule either. In fact, trusts that are named as IRA beneficiaries should be reviewed as there could be language in there that could limit how distributions are made over those 10 years possibly causing it all to come out in year 10 which could be a major tax hit. There may be some possible planning ideas to consider, but they are beyond the scope of this article. Those would need to be discussed on an individual basis with your advisors.

The SECURE act raised the age that an individual is required to begin taking mandatory distributions from their IRA or 401(k) to 72, up from 70 ½. This will make things a wee bit simpler as it always boggled me how they came up with 70 ½ to start taking RMDs. However, please note, that this change only takes effect for those turning 70 ½ in 2020 or later. Thus, someone who turned 70 ½ in 2019 and began taking RMDs under the old rules will be required to still follow the old rules and continue taking RMDs in 2020 even though they are not yet 72 years old.

This is a nice feature because donating your RMD directly to charity can be an excellent tax planning tool. So, even though the new RMD age will be 72, you will still be able to donate money from your IRA directly to a charity (up to $100,000 a year) at age 70 ½. With the new 2017 tax laws in effect and less people itemizing deductions, this has been a great way to support charities and save on taxes, especially for those that are no longer able to itemize expenses. When you make a QCD, you give money directly to the charity of your choice and do not count that distribution as income or a deduction.

Allows IRA Contributions for those over age 70 ½

This is a big deal as more and more people are working well into their 70s these days and many of them part-time without access to a 401(k). Prior to the SECURE Act, even if you had earned income after age 70 ½ you still could not contribute to an IRA. (NOTE: if you were less than a 5% owner of a company, you could still contribute to a 401(k) past age 70 ½ if you were still employed). Now someone over age 70 ½ that may be working part-time or has other earned income can put money in their IRA.

Penalty Free Distribution of up to $5,000 for Qualified Birth or Adoption

One can now withdraw penalty free, but not tax free up to $5,000 per child from an IRA or retirement plan for a qualified birth or adoption. This can only occur within one year after the birth or adoption occurs. They would also have the ability to repay the $5,000 later on if they so desire but are under no obligation to do so.

Can Use up to $10,000 from a 529 Plan for Student Loan Repayments or Apprenticeships

A Big Win for The Insurance Industry

I mentioned above how the insurance industry had some incentive to have the SECURE Act become law. Below is a good summary of this from  Forbes.com:

The bill is also a huge win for the insurance industry and lobbyists, who massively supported the bill. This is both a good and a bad thing for consumers.

The bill eases the way for annuities to be included in 401(k)s, which is good for consumers because Americans need more access and sources of retirement income. Lifetime income helps increase the longevity of a retirement income portfolio in many situations.

The bad news? The way they are allowing more access is by removing or lessening some fiduciary requirements to vet insurance companies and products before they are allowed into the plan. This could cause negative ripple effects down the line for consumers, especially when coupled with a lessening of the standards imposed by the SEC this summer.

I don’t think annuities being available in 401(k) plans is necessarily a bad idea, but I do have some concern for the easing of the fiduciary requirements to vet the insurance companies and their products that are allowed in the plan. It seems any time rules are relaxed, the rules are taken advantage and it usually does not end up well for the consumer. We will need to keep our eyes on this to see how it shakes out.

There is still quite a bit more to the SECURE Act in addition to what we have discussed above. I just wanted to touch on the main parts of this new law that will probably have the most impact on the people we work with. I also wanted to share some of the main facts of this as we understand them since I have seen a lot of misleading information out there. We will be discussing the issues and possible planning opportunities available with our clients over the next several months.