We are 126 days into the current market correction that began on Jan 4 of this year. The S & P 500 is down about 16%, the Aggregate U.S. Bond market is down about 9%, even Bitcoin and most cryptocurrencies are being crushed. There have not been many places for an investor to “hide”. It truly has been a year that we would like to forget, but, as investors, we know that markets are going to encounter rough periods like we are currently experiencing. That is part of the deal. In order to get long-term inflation beating returns that stocks provide, we have to endure the bumps in the road that pop up rather frequently.

Investors are uneasy as markets are dealing with the highest inflation in 40 years, the Federal Reserve raising interest rates aggressively, bonds having their worst start to a year ever, a war in Ukraine and major supply chain disruptions. We seem to be at peak negativity, and often times that is a good thing.

Another good sign is that CNBS has started running it’s “Markets in Turmoil” nightly specials as you know the media can never let a good crisis go to waste. However, I look forward to when this special starts running because every market correction I mention below was near it’s end once these fear fueled specials are broadcast.

I went and looked back at headlines in the Wall Street Journal near the bottoms of the several large corrections we have had since the Great Recession back in 2008 to see what the emotions were near the crescendo of those corrections. When I say the market, I am referring to the S & P 500, as that is probably the best representation of the broad stock market. What you will notice is that a lot of the headlines are very similar to what we are reading now.

Less than a year later we had another large correction where the market dropped 21.6% over 155 days from May 2 to Oct 4, 2011. The culprits then were Europe’s Debt crisis again, fears the U.S. was heading back into a recession and the U.S. Debt downgrade. Here is a paragraph from the 10/3/2011 edition:

From 5/20/2015 to 2/11/2016 there was a more grinding correction that lasted 267 days and took the market down 15.2%. The problems then were, worries of a default in Greece, a crash in stocks in China, oil prices falling substantially to around $28 a barrel, as there was actually too much oil (it is around $105 a barrel now) and North Korea saber rattling. Here is an excerpt from the 2/9/2016 edition:

A couple of years later the market fell 20.2% over 96 days from 9/21/2018 to 12/26/2018. Rising interest rates, a slowdown in China, trade wars and tariffs and a slowdown in housing caused the consternation at that time. Here is an excerpt from the 12/20/2018 Wall Street Journal that has a lot of similarities to today’s headlines.

There’s been a frantic rush to sell anything and everything, breaking many of the ways markets normally work. Safe-haven assets such as gold and Treasuries fell in price in recent days even as stocks plummeted, because people wanted cash.

At the same time, banks and other major financial groups that usually grease the wheels of the markets pulled back, resulting in higher bid-offer spreads and more difficulty trading. The unwillingness of arbitragers to take even small risks resulted in many exchange-traded funds moving far away from the value of their underlying assets.

Better News on the Horizon?

This correction may still have some room to go before it is over, but there are signs it may be closer to the end than the beginning. The first is the “Markets in Turmoil” special I mentioned above. The other is the chart below that shows the ratio of Bulls to Bears in the market compiled by a well-known market publication called Investors Intelligence. In almost all instances when this ratio has dropped below 1 it has been a good time to invest as the market has mounted some nice rallies. The ratio is well below 1 currently. It doesn’t always happen instantly, but the market eventually does rally when the ratio is less than 1. Also, stock market valuations are starting to look more attractive, they can still get cheaper, but they are looking better. 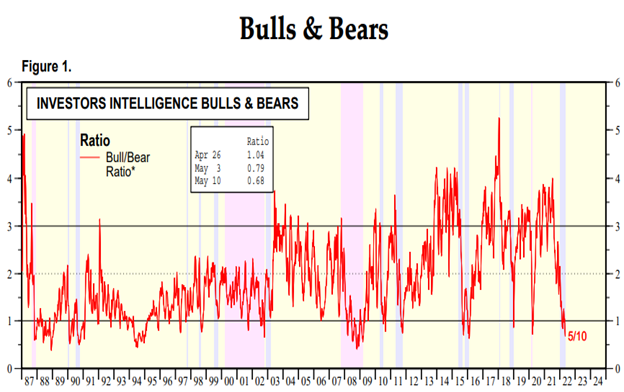 This certainly has been a grueling 4 months for investors and it could still drag on for a while, we just don’t know for sure. But investing is a long-term process. Money you need to spend in the next couple of years should be in cash or very short-term bond funds that will not be impacted much by rising rates. However, in the long run, stocks are going to give you the best chance of keeping up with inflation, you just have to live with the ups and downs. Just like everyday life. There will be better days ahead at some point.