Trey and I both looked at the Flight status board as we were waiting in line behind what seemed like thousands of people ahead of us looking to check in for their Flights home from Cancun. We had just finished a wonderful 8 days over Christmas and New Year's near Tulum in the Riviera Maya region of Mexico, about an hour and half south of Cancun on what could likely be one of our last entire family vacations for a while. Our oldest son, Trent will be graduating from the University of Alabama in the Spring and is embarking on a 4 year stint in the Army. Tammy and I took, Trent, his girlfriend, Kallie, who will be graduating from Purdue this Spring, and our younger son, Trey, a sophomore at South Dakota School of Mines and Technology on this vacation and now we were trying to get home.

We should have known that something was awry right then. Neither Trey or I could locate our flight on the board, whether it was on-time, delayed or cancelled. We both scanned the board and saw all kinds of other flights that were delayed and cancelled but for some reason our flight was not on the board. “Ok” I said, “I guess we will find out when we get up to the counter”. For now what seemed like a mile long line was moving at a slow pace, but it was inching closer to the check in desks. 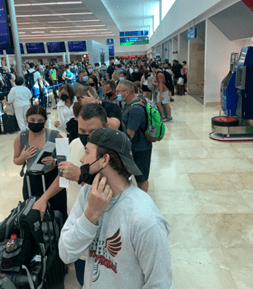 “Even though we are not near the front, this was behind us”

We made our way along the line and were about 10 groups away from checking in. I thought to myself, “this isn’t so bad” but then the line stopped. So we waited, and waited, and waited, still no movement. We could see several people having animated discussions with the airline people and after about 30 minutes of going nowhere, the word slowly trickled back through the stagnant line. “Cancelled”. The flight back to O'Hare is cancelled. Ouch!

I had been reading in the Wall Street Journal all week while we were in Mexico about all the air-travel snarls due to the rise in Omicron cases of COVID along with some nasty weather sweeping the country. It is a nasty combination for those flying. Many pilots and airline workers were out, so there is just not enough manpower to run full operations and that’s why so many flights were being delayed and cancelled. Even though trouble was brewing we had made it down without a hitch and as I spent my week relaxing on the beach and at the pool it was always in the back of my mind.

“All right, we need to act fast” I said. We all knew our COVID test to be able to leave Mexico expired @ 4pm. It was now 11:30am. We had to get checked on a flight out of Mexico by 4pm, or have to find a place to stay another day and take another COVID test and our airline had no other available flights to easily change on to.  We needed to move quickly and internet signal is not always the greatest in Cancun, especially with so many travelers in a similar predicament as ourselves, we knew the internet may be a challenge. However, we had the luxury of 3 college students that are whizzes on their phones and finding possible flights and were lucky enough to have just enough signal to accomplish some last minute travel planning.

They were able to come up with several possibilities, but none of them were going to get us home today,  and none of them were really good options and we were running out of options to just get out of Mexico by 4pm. “Here’s one to Montreal, but it has a 12 hour layover, before it heads to Chicago”, Trent exclaimed, but this would mean you have to stay quarantined in a small area and spend a long night in an uncomfortable chair or the floor in the airport. We were running out of options, and the remaining available flights seemed to be filling up fast.

“Yeah, that Canada flight is a no-go” I said as I imagined a tortuous night at the airport in Montreal. “Keep digging”. Watching young people navigate their phones is kind of like watching a virtuoso pianist in action. Their fingers move with lightning dexterity and they can navigate to different things faster than I can imagine ever doing on a phone. It truly can be a marvel to witness. Ok, it is almost 1pm, we still need to just get out of Cancun and just get on the way to somewhere in the U.S. before our COVID test window has expired. Finally, Trent found a flight to Houston that leaves at 3:50pm and still has a few seats remaining. “Book it!” I said excitedly to Trent. Of course same day flights are not a bargain and it suddenly became apparent it is going to cost us several thousand dollars to get home. Luckily, I did purchase the travel insurance this time around, so we are hoping we can get reimbursed for all the extra costs we are going to incur to get home, but more on that later.

All right, Houston it is, but then what? Now that we have at least beaten the ticking COVID test clock, we need to determine what our next steps out of Houston will be. We met some other travelers that were heading back to Madison and Green Bay, that were on our upcoming flight to Houston. They were going to rent a car and derive the 16 hours through the night to get home. Ok, I guess we can try that. This time I managed to move my fingers somewhat faster on the phone, although nowhere as fast as the kids, and with just 30 seconds to spare before I had to go to airplane mode on the Houston flight, I secured a mini-van at the Houston airport. Rental cars are also not the easiest these days either. 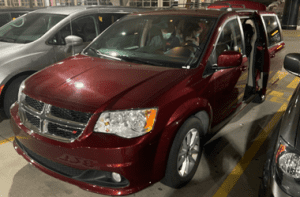 Our rental mini-van for the drive out of Houston

I was not looking forward to the long drive home, although I figured we would probably get a hotel a couple hours outside of Houston, since we definitely were not going to make it back for Tammy to get to work on Monday anyway. After clearing customs and retrieving our luggage from Carousel 4 at the G.W. Bush International airport, we ran into our friends from Wisconsin again. They had found a direct flight leaving out of Austin to O’Hare early the next morning, so instead of driving all the way home, we could drive the 3 hours to Austin, stay the night and get up at 4am and catch a flight back. Since there were no available flights out of Houston to Chicago without extremely lengthy layovers somewhere this sounds like a reasonable solution. “Book em Trent” I blurted out, and those quick fingers got to work and booked us some more not so cheap flights out of Austin.

So one of the good things about being in the Houston area was that at least we could stop and get some good BBQ and brisket, after all we are in Texas! The kids got moving again on their phones and within a couple minutes had an idea, let’s try a place called “Pappy’s” right on the way out of Houston. What a wonderful choice. The brisket and BBQ was top-notch and an ice-cold beer never tasted so good. The staff were really friendly, and the atmosphere was awesome. We were able to catch some of the Packer-Viking game at Frigid Lambeau field on T.V. and knew that we were heading back to below zero weather after getting really used to 85 and sunny every day. Although, in Houston, it was unusually cool and was only about 40 degrees. 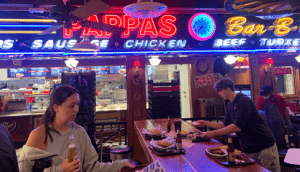 Dinner at “Pappy’s BBQ” in Houston

We finished up at Pappy’s, and Trent quickly found us a hotel right next to the airport in Austin. “Vamos” I said in my rudimentary Spanish, “We are heading to Austin”. We all piled into the Dodge Caravan rental and headed out for the little under 3 hour drive to Austin. I have driven through the Dakota’s and other places out West and seen cars really fly on the interstate, but Texas drivers take it to a whole other level. Some cars and trucks flew by us even though I was going a few miles over the speed limit myself. Although dozens of vehicles screamed by us at what seemed like 100+ mph, I only saw one car pulled over along the way.

The blare of several phone alarms greeted us at 3:30 am as we needed to get out of the hotel by 4am, get the rental back and prepare for another nightmare at the Austin airport. Would we have to contend with more delays and cancellations? I guess we will see. We made it to the airport and are watching the flight status board and starting to see one by one flights getting delayed and cancelled. “Oh no” I sighed to myself, “Here we go again”. We made it through TSA and got some breakfast, all the while keeping a close eye on the flight status board.

“Our flight is boarding” Trey said excitedly, “It sure is” I said, “We just might make it home today after all”. Of course I was still going to hold my breath until that United Airlines flight got off the ground. “Flight attendants, prepare for take-off” the pilot said through the intercom. It looks like we are going to make it back.

Things started looking up. In O’ Hare we got in a bit ahead of schedule, our luggage was ready almost instantly and our shuttle back to the Hyatt Regency where we parked my truck was waiting for us. Now, let’s uncover all the snow on my truck and hope the battery didn’t die or something. I hit the remote start a few minutes before trudging out to the truck to bring back around to the hotel to get all our luggage. I got out to the truck and cleared several inches of snow off and pulled around to load all our luggage and passengers. An hour and a half later, we were picking up our dog Ande at his pet hotel and relished in his excitement of seeing us for the first time in what must have been an eternity to him.

Well we made it home, but now I have to go in and add up the costs of the 2 extra flights, car rental, gas, hotel and meals to make it home and submit to the travel insurance company. It looks like it was about an extra $3,500 in expenses when all is said and done. Have to keep our fingers crossed that the insurance will work as they say it does and reimburse us for the added costs. The folks on the phone say it will, but I am going to reserve judgement until I see the check. 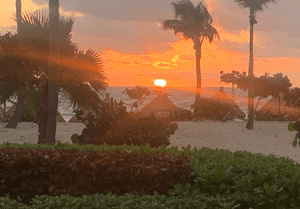 Besides the struggles to get home, we had an incredible vacation, and got to spend some great time together as a family in one of our favorite places. However, I would suggest that if you are in a similar predicament, consider researching alternative flights the day before your travel and possibly book some refundable alternative flights just in case your flight gets CANCELLED. It is probably also a good idea to have travel insurance during these days of COVID delays, although I guess we will see how good an idea it is once the reimbursement comes through!