There is a lot of talk about an impending recession

Everywhere you turn, whether it is on the news, radio, internet, television or just in conversation with friends, the topic of Recession abounds.  You keep hearing that a recession is imminent or that we may already be in one right now, as we speak. But from a lot of what I hear, many people are scared and don’t really understand what a recession is and isn’t. Let’s delve into this topic a bit and try to provide some facts on what a recession actually is, what the effects may be and how long one might last.

What is the definition of a Recession?

How do we define a recession? A pretty good definition of what a recession is, would be a significant decline in economic activity, usually lasting more than a few months. It is generally considered to occur when gross domestic product (GDP), employment, and investment all fall at the same time.

An organization known as the National Bureau of Economic Research (NBER), which is a non-profit research organization committed to undertaking and disseminating unbiased economic research among public policymakers, business professionals, and the academic community, officially declares recession start and end dates. You may hear in the financial press that the definition of a recession is two consecutive quarters of decline in real GDP, but according to the NBER website that is not actually the definition they use to determine a recession. They use several other indicators such as unemployment rate, GDP, personal consumption expenditures (PCE), manufacturing and trade sales, industrial production, and a number of other indicators, so it is really more of a subjective assessment and usually is announced several months after the recession has actually started because most of their data is backward looking.

How long do recessions typically last?  If you go back to the mid 1800’s the average length of a recession is a bit over 17 months, however, since WWII, the average length has only been about 11 months, and the Great Recession of 2007-09 lasted 18 months although it seemed like an eternity at the time. Here is a chart of unemployment and all the recessions we have had since 1945: 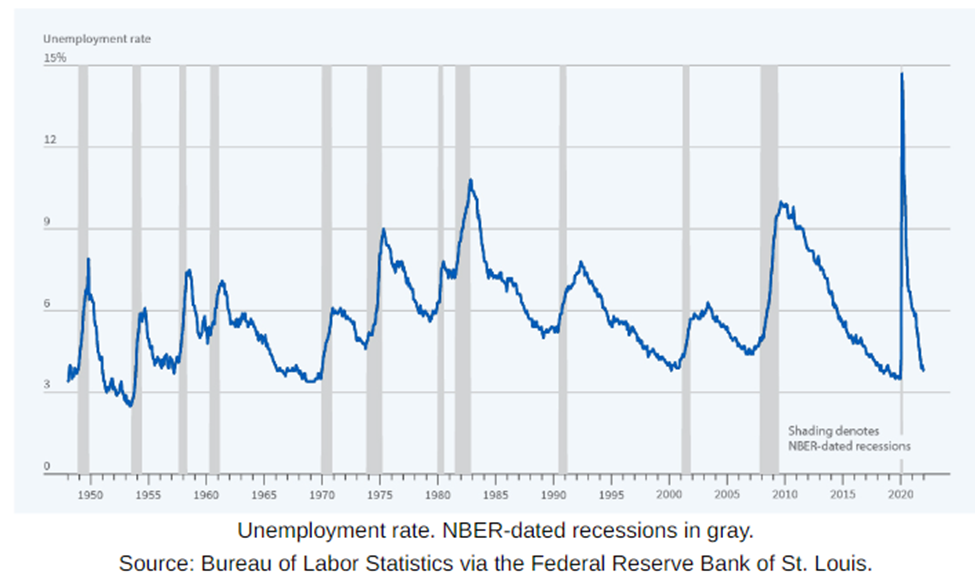 You can also see they occur rather regularly about once or twice a decade on average. In fact, since 1854 there have been 34 recessions in the United States.

What are the Negative Effects of a Recession?  Unemployment rises and a joke among economists is that “a recession is when someone else loses their job, and a depression is when you lose your job.” Also, stocks generally fall about 20% to 30% or more (It is likely the current stock market decline is already pricing in a lot of the effects of a possible recession, since the stock market is pricing in expectations for the future), home prices fall, some companies fail, and the morale of people is challenged. People pull back on spending and tighten their belts, it is also why it is so important to have a healthy cash reserve.

What are the Positive Effects of a Recession? Believe it or not there are positives that come from a recession, much as the Phoenix rises from the ashes. Inflation falls and prices come down as companies try to sell inventory that is building up and the economy cools. Interest rates generally fall, and bonds often do well, stock market valuations become more attractive, and the froth and speculation that could lead to a market bubble is removed so market fundamentals can improve.   Recessions are a natural part of the business cycle, and one could argue that they contribute to the long run prosperity of the country by eliminating inefficiencies and speculation that build up with companies and people. If you have cash, you may really be able to pick up some bargains in the next year or so for many big-ticket items as inventories likely build.

What is the difference between a Depression and a Recession? There is no official designation, but a depression is a long-lasting, deep recession. Depressions last several years and the last one we had was the Great Depression in the 1930’s. We had what was called the Great Recession from 2007-2009, but it never was officially known as a depression since it only lasted 17 months or so although it felt a lot longer than that at the time, while the Great Depression lasted over a decade.

What Should I do if we are Really Heading into a Recession? Building a healthy cash reserve is a real good idea if you can muster it. Having several months of cash in savings is really handy should you lose your job or would rather not tap your long-term investments or retirement accounts and maybe just give the “peace of mind” of having a healthy cash balance. As investors, you should already have a long-term asset allocation that you can stick with in good times and bad. Some of the worst investing mistakes are made by those selling investments at the worst times during a recession and they never get the chance to recover. Many people also pull back on spending when the economy is down, and this can be a good idea both financially and mentally. Once things are looking better, you can resort back to your old ways.

Conclusion: A recession is not the end of the world. They are, however, not a lot of fun as we see our investments decrease in value, people lose their jobs, and the value of our homes fall. They can surely be unsettling times for many of us, but you have already lived through many recessions in your lifetime, and you will get through the next one, if indeed, we are heading into one or possibly already in the midst of one.

Also, from a lot of data I have seen, consumers, banks and companies are in much better shape now than they were heading into the last several recessions. This should provide some ballast and could help limit the length of a possible recession.  Sure, it will likely get worse before it gets better, but it will eventually pass with time.  Heck, you survived a pandemic and the Great Recession in the last 14 years, you can do this!