I am writing this on a plane heading to Arizona for my annual golf trip and a little bit of actual work. It never fails, when I go on a trip for a few days, the market often has a temper tantrum. This time it is fears of the Coronavirus and a pandemic. (This is not the Corona virus you might get in Mexico drinking Corona beer, if you know what I mean). I only saw a handful of people with surgical masks at the airport so even though the market appears to be worrying about the virus, the general public does not yet appear to be concerned. My flight was totally full, O’Hare was bustling as was Sky Harbor in Phoenix so there does not appear to be an impact yet from the fears of the Coronavirus.

The markets had another not so great day, and the long-awaited correction that I keep talking about in our meetings with everyone seems to be upon us. We all know that the market will have corrections and volatility, but when markets are as benign as they have been for the last 14 months, activity like we have seen the last few days really gets people on the edge of their seats.

Let’s put the selloff in context. Look at the 5-year S & P 500 chart below, after this 3 day sell off, we are back to about where the S & P 500 was in November. Also, we were just at all-time highs and the market was getting frothy with speculation. You had college kids posting videos talking about how easy it is to day trade stocks a la 1999. Does that sound like déjà vu? The good thing is the market is nowhere near the bubble valuations of 1999, but we were at a place where a correction is probably healthy for the long-term health of the markets.

Let's also look at all the corrections and panics the market has had over the last 11 years and see where things compare right now, thanks to Charlie Bilello, who you can follow on Twitter, puts together some phenomenal data grabs such as this, and one later in this article. 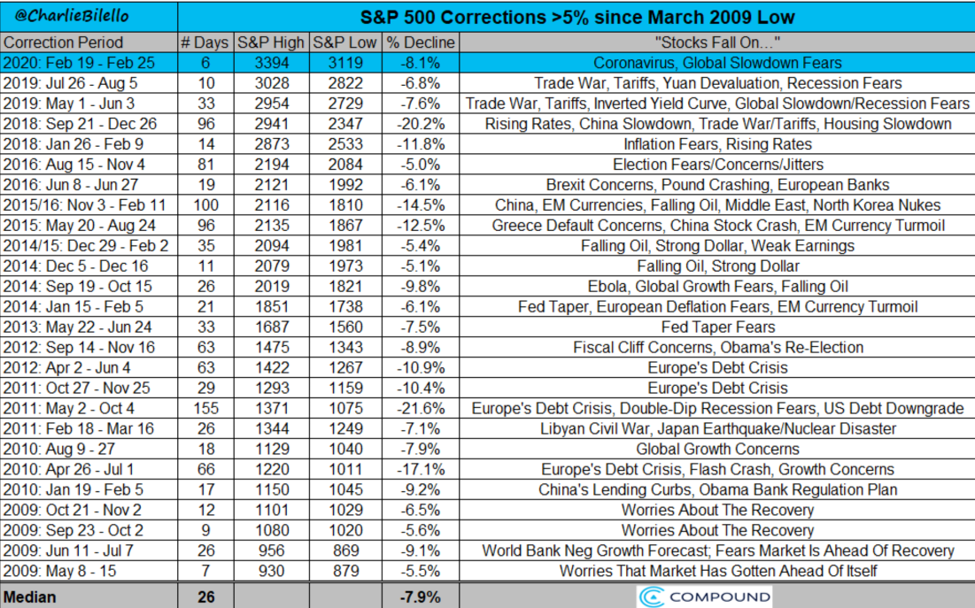 I am able to get the live TV feed in-flight and CNBC is airing the press conference from Health and Human Services and the CDC (Center for Disease Control). They think they could have a vaccine within the next month or two, and even though that doesn’t help the shorter-term fears, it is really good news for the longer term. They also mentioned that the warmer weather may also likely slow the spread of the virus much like the influenza virus slows down in the warm seasons.

They also mentioned that the risk in the U.S. was low, but that there will likely be some impacts here in the U.S and this means corporate earnings are likely going to take a hit, which is one reason the market is reacting the way it is. This is what the market is concerned about. However, it is likely a short-term effect, much like many of the other short-term panics over the years were quickly forgotten, remember Brexit, the Chinese Yuan devaluation in 2016, Greece in 2012, etc. You can also look at past epidemics where the concern for pandemic was high such as SARS, Swine Flu, Ebola and others and after some short term market histrionics, the recovery was relatively quick. Sure, this could end up being worse than the others, but odds still are a recovery would occur sooner than you think.

Also, I much rather would see a sharp spike down, as they generally bounce back rather quickly. It is the slow grinding down markets like 1972-73 and 2001-2002 that usually lead to slow recoveries. Markets often act like rubber bands and when there is a sharp drop, it is often recovered by a sharp recovery.

For those of you that have a fair amount of bonds in their portfolio, they are doing what they are supposed to do in times of panic, and are having a great run as the 10 Year U.S. Treasury has hit its lowest yield ever @ 1.33% or so. Heck, the 30 Year Treasury is at 1.82%.  When bond yields go down, bond prices go up, so lower bond yields equal gains for your bond holdings, thus your average bond fund is up around 3% year to date.

Also, look at the bright side, CNBC is running their usual “Markets in Turmoil” special tonight and I always look forward to that, as it almost always signals a panic bottom in the markets. I would be more worried if they were not running their special. The media is going to have a heyday with all this panic, so we have to keep our wits about us and remember our long-term plans. Panic is never a good investment strategy and the one below is market return after CNBC trots out their “Markets in Turmoil” special. It confirms my hunch on the panic bottom being close when you look at the returns a few months afterwards. Again, thanks to Charlie Bilello on the awesome table: 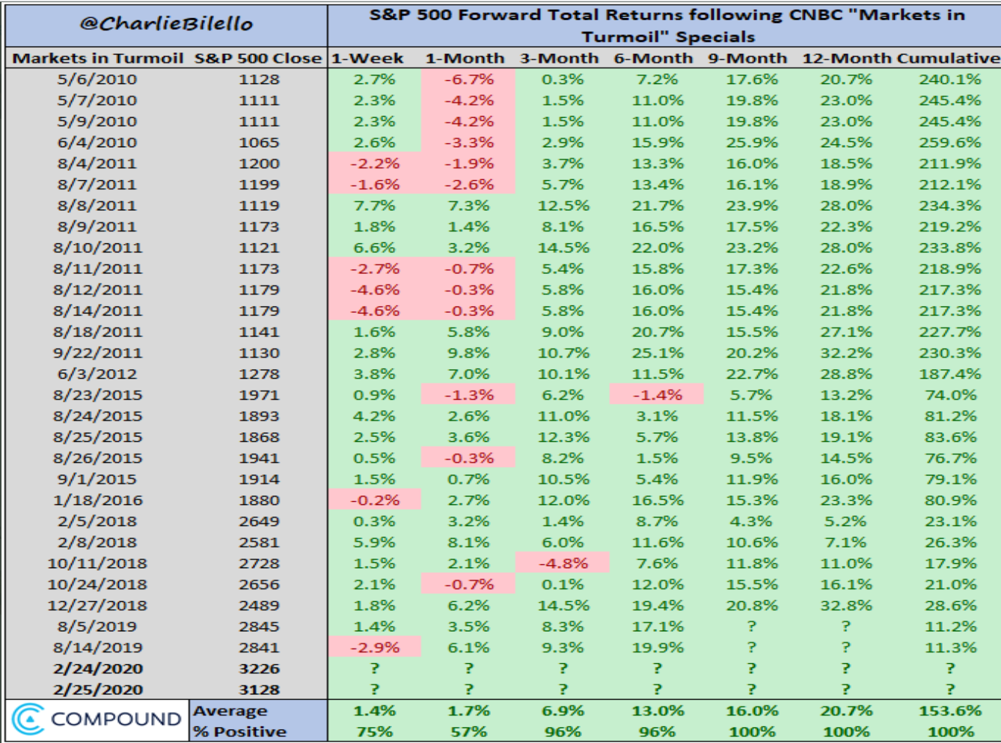 I don’t want to downplay the seriousness of this virus, it certainly is something that we need to be concerned about and it could be something that does impact our daily lives at some point. But, the market usually overruns to the upside and also to the downside. So it likely got ahead of itself over the last few months and it is now likely close to over-extending to the downside. The Federal Reserve also is likely to be proactive if things continue to weaken and announce rate cuts and other stimulus measures which would likely make it very enticing to stock buyers and could create a sharp “V” shaped bottom. In fact, sharp whooshes down are likely to create these “V” shaped bottoms.

Things could still go down from here, but based on past history, when you have such a sudden drop as we have just had, chances are, there is a pretty good recovery to follow. Again, it all comes down to sticking with your long-term plan and not letting bumps in the road derail what you are doing.