The Russian invasion of Ukraine is scary, but it is not a time to make rash investment decisions

If you woke up Thursday morning to the news that Russia finally invaded Ukraine and saw that most of the major stock indices were down 2-3%, had a freak-out and sold all of your stock holdings, you probably weren’t that excited to see that the markets recovered by the end of the day and were actually up 2-3% for up to a 5% jump from the morning rout. Investment decisions made when panicking seldom, if ever turn out well in the long run. When you invest in the markets, you invest for the long-term, not the day-to-day headlines.

No doubt, this is a scary time in history for the entire world. After relative peace in Eastern Europe since the end of the Cold War, we suddenly have reverted to the times of Rocky IV and our arch enemy the Soviet Union.  For those born since 1990, they don’t remember the wary eye we all cast towards the U.S.S.R in those days and the Eastern bloc of countries that were all part of the Soviet empire ruled under a totalitarian Communist regime. I vividly remember as a boy, reading about ICBM’s and how we were always just a button push away from a nuclear holocaust. It was always in the back of my mind and the Russians were always this big, bad foreign enemy that loomed far away.

With the invasion of Ukraine this week, it seems that the Cold War may be rekindling. We don’t know for sure what Vladimir Putin’s endgame is, but there have been a number of articles positing that he wishes to change the ending of the Cold War to a better outcome for Mother Russia. Putin’s actions are starting to be compared with Lenin and Stalin, so is Ukraine the first chess piece in a much bigger game?

So, What Does This Mean for my Investments, and What Should I be Doing?

This is the million-dollar question I am hearing from clients right now. First of all, since we are long-term investors, you should already have a solid, long-term asset allocation in place. We know there are going to be bull and bear markets, crashes and corrections, fear and euphoria. A long-term asset allocation designed for your situation takes all of that into consideration. It has been proven to be very difficult and almost impossible to time the markets, so you don’t want to be jumping in and out of the markets at the first sign of trouble or when it looks like the market “train is going to leave the station”. Sure, you want to make adjustments, modifications and rebalance as needed, but you don’t want to let fear and panic set in and just because some “prophet” has said the market is going to crash, or let some scary, large down days due to geopolitical events cause you to put everything in cash for fear of the market going to zero.

We are currently in the throes of a market correction; will it turn into a Bear Market? Who knows? If someone claims they know for sure, they are full of $#!+. Truth is, we will experience several bear markets in our lifetime. If the recent gyrations of the market have you nervous, it’s totally understandable to feel that way, but return requires some risk (especially when cash and CD’s give you virtually nothing) and if you can’t stomach some short-term volatility in order to earn some long-term return then the stock and bond markets aren’t’ the right place to put your money. However, if you have all your money in cash or low yielding, “safe” investments, you are getting clobbered with inflation running over 7% currently. Sitting in cash right now virtually assures a 7% loss right now. And much more the longer you sit there.  Here is a fantastic article Schwab put out a couple of weeks ago regarding market corrections and bear markets.

There have been many scary geopolitical events over the years. Generally, if we are not in a recession (and we currently are not) the S & P 500 has been a little over 7% higher on average 6 months after the event and almost 11% a year later. On the flip side, if the event occurred while we are mired in a recession, markets were down about 6% after six months and a little over 11% a year later. This would give credence to the fact that whether we are in a recession is more important to the markets than the event itself. Below is a table of major geopolitical and historical events going back to WWII. A lot of them sure bring back some memories and many I had totally forgotten about. 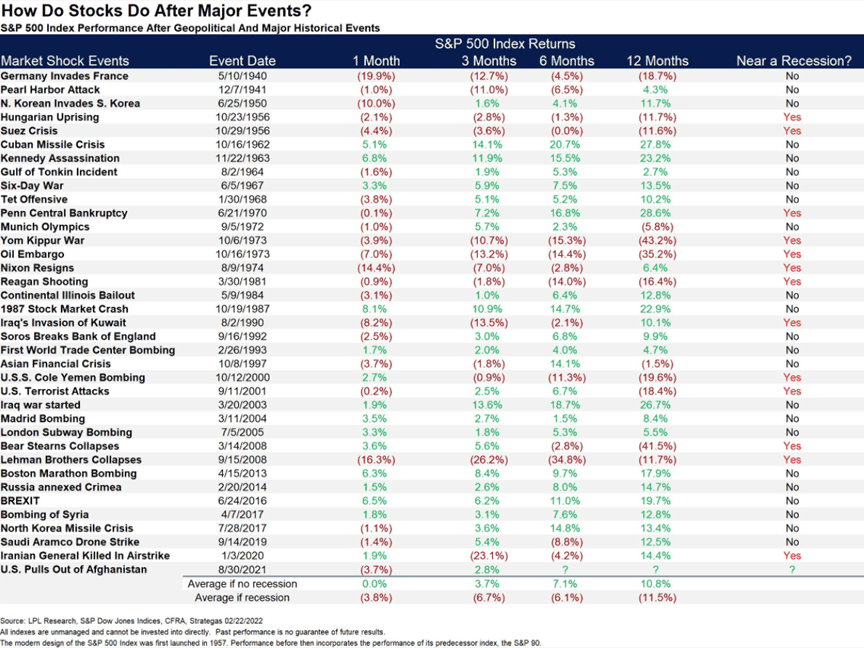 What Might We Expect Going Forward in 2022 and beyond?

Markets have recovered the early shock rather quickly and are up again substantially today (Friday 2/25). There is an old adage on Wall Street, “Buy to the sound of cannons, sell to the sound of trumpets”. Meaning, when things look dire, it is usually the best time to put money to work, and when everything seems rosy, something not factored in, comes in and shocks the markets. Does this mean we are out of the woods? I don’t really think so. The market is at the mercy of headlines coming out of Ukraine, so with positive headlines the market will move up, and negative headlines will move it down. Volatility is high right now and will likely remain high for some time, so we will need to fasten our seatbelts. When you step back to the bigger picture, the S & P 500 is back about to where it was in June of last year. Markets cannot just go straight up and after the great run of the last few years, there is a good chance 2022 will end as a down year. Again, I have no idea for sure, but we do have a lot of hurdles in the market to contend with.

What Could the Longer-Term Affects of the Ukraine Invasion Be?

The invasion definitely complicates several things that have been giving the market indigestion of late:

All in all, you probably do not want to be making radical changes to your portfolio, especially if it has served you well over the years. However, it may be a good time to re-visit your asset allocation and review the potential range of outcomes and the long-term rate of return you need for your circumstances. I will conclude with several quotes about investing and the markets, but am unsure as to who the authors are: