Things are likely to be uneasy for a while, but we probably do not have to worry about another "Great Depression".

We just ended one of the worst quarters in history for the markets (you knew that when you looked at your most recent brokerage or 401k statements). Stock markets dropped 30% and more during March and bonds also took some hits as well. We are in the middle of a serious pandemic and will most certainly be going into a recession. It essentially all just hit us in the matter of a couple of weeks. The question is, for how long? That is the key variable. Stocks and bonds are likely to be volatile for some time, and we will probably be subject to large market swings both up and down for the next few weeks and possibly months. And while we have enjoyed a real nice somewhat “V” shaped rally so far into April, we need to be careful to check our emotions and not get too carried away that we are out of the woods just yet.

How wild was March 2020 compared to other times in history? Take a look: 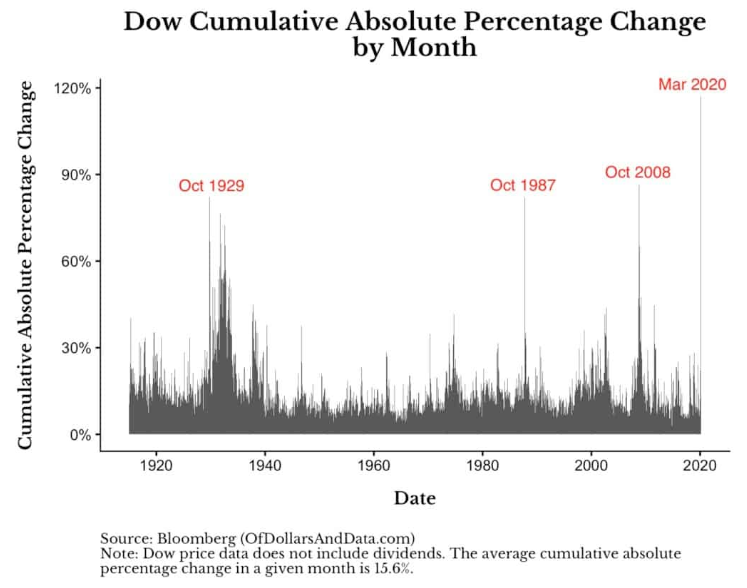 March 2020 was almost 30% greater in absolute stock market price swings than 3 other great historical crashes, 1929, 1987 and 2008. That is amazing seeing what we just went through. Bear market historians will tell us that we still should be prepared for some more wild times ahead.

So, yes we are breathing a little bit easier as the market has rallied and recovered about half of the drop so far, it would be a bit of a stretch to think that it will go right back to where it was. This is a bear market and we are most certainly in the throes of a recession, and we still have a lot of hurdles to overcome such as conquering COVID-19 and how we will restart the economy once it is safe to do so. I have no doubt we will solve both of these dilemmas but it is still going to take some time and is not going to occur overnight.

That is why I believe there will be plenty of time to put cash to work over the upcoming weeks and months.  You just need to avoid panicking at both extremes. Yes, you can panic when markets are crashing, just as you can panic buy as markets are screaming higher and both can have negative results. I often think back to an old quote that is associated with Warren Buffett, that really resonates with me:

I am very optimistic for the medium to long-term outlook. This country has persevered through World Wars, terrorist attacks, global financial crisis’, serious pandemics like the Spanish Flu of 1918, and political events such as the Cuban Missile Crisis and Watergate. However, it will take some time to conquer COVID-19 and return to some semblance of normalcy not only here in the U.S. but around the world.

It is also okay to feel uneasy about what is going on, not only with our finances but also for our health and that of our loved ones. This is certainly a scary time for all of us and the headlines and news reports can definitely be hard to watch.

You also have to be careful to not get carried away with a what some of the doomsayers (most of whom have been calling for a crash for the last 12 years, so I guess the stopped clock is right once in a while), that are saying we are headed for a depression. Many of these guys have been wrong for the last 12 years, so why should they be listened to now?  I don’t believe another Great Depression is likely for a number of reasons:

The first is that the response from the Federal Reserve on the monetary side and the fiscal response from the government, while a little slower than I hoped, was still pretty quick on a historical level. The Fed has stepped in to backstop many areas of the financial markets from municipalities, to small business to large corporations affected by the virus and the level of aid the government is rolling out is unprecedented. I mean they are throwing around Billions of dollars like it is a rounding error. Back in the Great Depression, the opposite occurred. Monetary policy, trade and fiscal policy were all tightened which led to the length and severity of the depression. What is being done today is the exact opposite of the doomed policies of the 1930’s.

Second, is that this is a self-inflicted recession to slow the spread of COVID-19. Most all other recessions occur because of problems in the economy that lead to a downturn in economic activity. This recession was caused by the government to slow down a health threat to all of us. The economy was functioning very strongly before the pandemic hit. Sure, unemployment has instantly hit levels higher than any time in modern history, but that was because of the orders to shut down, not because the economy was cratering.

Third, we were on the gold standard back in the Great Depression and that also limited what could be done regarding monetary policy and further exacerbated deflationary tendencies. Deflation is a hallmark characteristic of a depression. True, one can argue that what we are doing right now, basically creating money, may have inflationary and other ramifications down the road, but that same refrain was common back in the depths of the 2008-2009 Great Recession. We need to tackle one problem at a time. We need to get through this crisis and get on sound footing again, and then can worry about the longer term affects of all the stimulus.

I don’t want to minimize the effects the coronavirus shut-down is having on our economy and our nation.  But, the U.S. and the rest of the world seem to be coming together in encouraging ways to defeat the virus and re-start our economies and eventually our everyday lives. We will make it out of all this, but it is going to be a wild ride, so hang on!