Markets have settled down for the most part, but is it just temporary?

Even though we are still in the throes of the COVID-19 pandemic, due to the quick actions of Jerome Powell and the Federal Reserve and fiscal programs such as the CARES Act and the Payroll Protection Program (PPP) provision in the CARES Act, markets around the globe have staged a remarkable and somewhat improbable recovery since the depths of mid-March.

Since the lows in March many areas of the stock market have risen 40% or so, (although the market is giving some of this back as I write this). Since markets dropped 30% and more in February and March, they have to rise a much greater percentage than they dropped to get back to even. Let’s look at a simple example of what I mean:

The S & P 500 has almost done just that, as it got back to even on the year earlier this week, at least for a brief moment. However, many areas of the market are still a long way from even for the year. Since most investors have a globally diversified portfolio that contains several different areas of the market besides the S & P 500, let’s take a look at how they are doing. Very few people invest in just the S & P 500.

Below is a year-to-date chart of major asset classes that are included in most well-diversified investment portfolios. The S & P 500 is shown in purple and was down just 0.28% remarkably after all that happened in February and March. But take a look at the other areas that are still a long way from even. International stocks (in gold) are still down 8.31%, Emerging Markets stocks (in blue) are off 8.60%, Real Estate (in green) is down 9.69% and U.S. Small Cap Stocks (in pink) are still off 11.43% for the year. You can see that all these areas of the market were down at one time well over 30% and some, well over 40%. 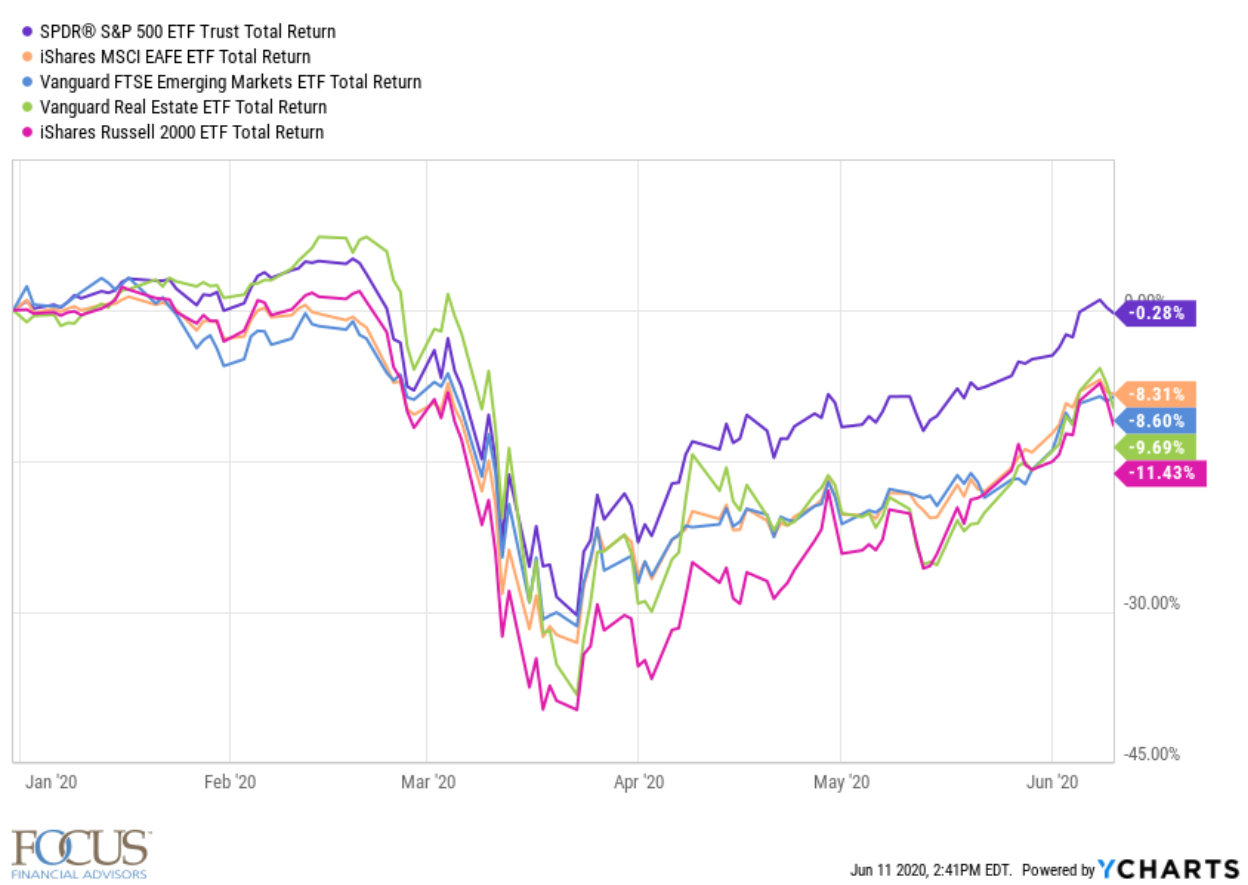 Even high quality bonds were not immune from the carnage in February and March as anything that could be sold at a reasonable price was sold to raise cash by many over-leveraged traders and hedge funds and that included Treasury and Municipal Bonds as well. Most areas of the bond market have bounced back reasonably well, however, tax-free Municipal Bonds (in blue) which usually track pretty close to the total bond market (in purple) have lagged by several percentage points behind taxable bonds this year, as worries about lower tax revenues for cities and states have kept returns muted. Short-Term Bonds (in gold) have held up consistently well, but High-Yield bonds (in green) are still negative year to date. High-Yield or “junk” bonds are issued by companies of lower credit quality and thus have been hit by worries of bankruptcies in this recession. They are always going to be more volatile in tough times, but over the long-term produce more “stock-like” returns. 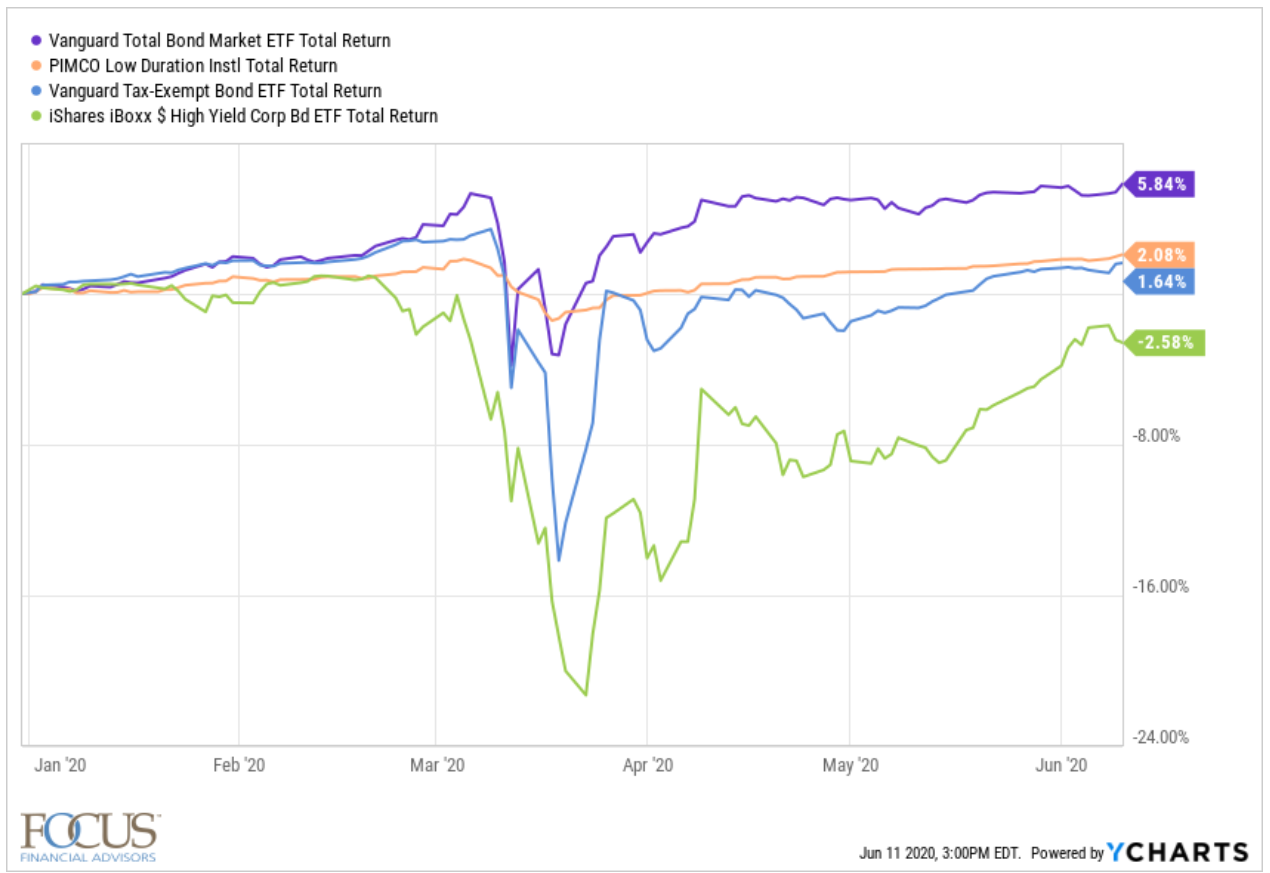 So, stocks have recovered a good chunk of what they had lost when the pandemic first hit, but we are now in the midst of what is likely to be a prolonged recession. It seems stocks were banking on a “V” shaped recovery, when in reality, it might resemble the lines on Charlie Brown’s shirt.

True, the worst may be over, as the Federal Reserve has assured markets they will do whatever it takes to prevent the financial system from collapsing, by providing ample liquidity and other programs designed to provide stability to the markets. There is still a lot of uncertainty though with the worries of a second wave of infections as lock-downs are eased and protests rage across the country. There is also worry of another wave that could hit in the fall with cooler temperatures and people together inside again.

Also throw into the equation, the Black Lives Matter protests that continue to go on, the millions of people out of work, that many of which may not get their jobs back and the Presidential election in November that almost promises to be a spectacle of uncertainty and we have the makings of a likely volatile period in the markets. 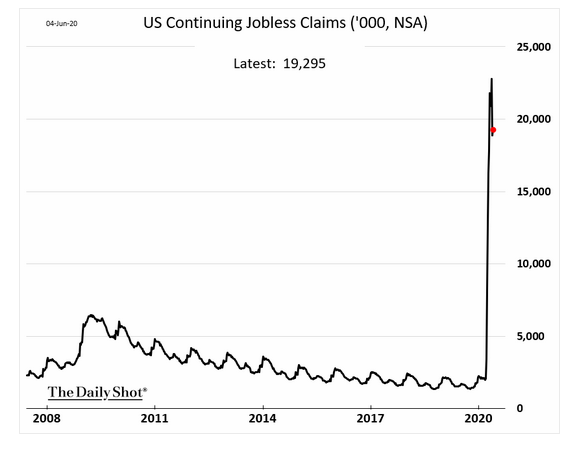 Jerome Powell, the President of the Federal Reserve, in his news conference yesterday, said that they expect the economy to remain sluggish as it recovers well into 2022. He also said yields on bonds are going to remain near zero until at least then as well because they do not want to raise rates into a recovering economy and risk slowing it down again. What this means, is that it is going to be difficult for bonds to continue to produce the kind of returns they have produced the last year and a half, and investors are almost forced to own a good portion of stocks to generate returns that can keep up with inflation over the long-term.

The COVID-19 pandemic and related effects on our health and the economy is not going to end anytime soon. Yes, it is encouraging that vaccine trials are being fast-tracked and the world is working together to develop a vaccine, but at a minimum is still several months away. We are likely to see the economy and the markets move in fits and spurts for the foreseeable future, and will have to learn to live with it, just like we are learning to live with the new reality of this virus.

As I have said in many of my past musings, we will get through all of this, but it is not going to be easy or fun. We need to hold on in the short-term for the benefits of the long-term. Prepare for the Charlie Brown shirt recovery. Good Grief!