All the Market Predictions for Next Year are Pretty Much Worthless!

I don’t need to remind you that 2022 has been the worst year in the stock market since 2008, and pretty much the worst year ever for bonds. 2022 will be remembered with the same fondness as 2008, 2000-2002, 1973-74 and all those years where investors got taken out to the woodshed and beaten. We are all looking forward to 2023 and now we will be inundated with all the Wall Street and big banks predictions about what the markets will do in 2023. I have a little advice for you. Ignore it!

Ok, why should I ignore all these high priced analysts that surely know everything about the markets and what they are going to do?  For starters, their track record has never been very good. You rarely see them comparing their market predictions from a year ago to what has actually happened. Sure, a few of them do, but not many. I have probably written about this before in my blogging career, but all we need to do is take a look at some of the well known brokerage and banks predictions at this time last year for 2022.

I do need to give Ms. Subrmanian some credit though as her call on energy and financial was a good call as those are 2 of the best performing market sectors in 2022, but her S & P 500 target was only off by 700+ points.

You can go back and run this exercise year after year and Wall Street misses the mark most years and often by a substantial margin, especially the bad years such as 2000 & 2008. You would be hard-pressed to ferret out one analyst that called for market drops in those years. I remember reading the forecasts at the end of 2007, recalling not seeing one of them predict a drop in the markets that year, even though the housing bubble was showing signs of deflating.

What is interesting is now that the market has had such a rough year some of the analysts are predicting   larger pullbacks still in 2023, which I consider good news since these guys are usually so far off on their predictions.

Short-term market forecasts are just plan folly and only good at getting a few eyeballs to sell advertising dollars. Most seasoned investors, ignore these predictions as just noise and you should ignore them to. It is impossible to gauge what the market will even do on a day-to-day basis. However, you may want to pay some attention to longer-term market forecasts such as those that look out a decade or so, as these will tend to be somewhat more accurate because the long-term trend of the markets is generally up and to the right especially the longer the time frame you look at.

It is not only the stock market predictions that have a lower batting average than the Chicago Cubs, these guys and gals were not too hot on their predictions for inflation and the bond market as well. Most economists called for the Federal Reserve to raise interest rates by about 1.5% in 2022, when the actual rise was 4.25%, so they were just off a bit on that one.  These same Nostradamus’ called for inflation to be about 3.5% for the year, well, it got up to about 9% and is still in the mid 7% range as of today.

So, why do they keep cranking out these worthless predictions? Because if they get one right, they will get CNBS and other media appearances forever, just look at Nouriel Roubini, who did call the 2008 market crash, but has been pretty much dead wrong ever since, he still gets plenty of airtime because of that one right call out of dozens of wrong ones. Few remember, that since 2008, his track record has not been so hot, but he made the prediction of the crash of 2008 so he will forever get air and print time.

Now, do we dare look at what these “visionaries” see for 2023? Heck, you and I can put our finger in the air, come up with a number, and probably do better than what all this Wall Street “research” will get you. Below are the “forecasts” from some of the big players in the investment world. Maybe we should circle back a year from now and see how these all turn out? 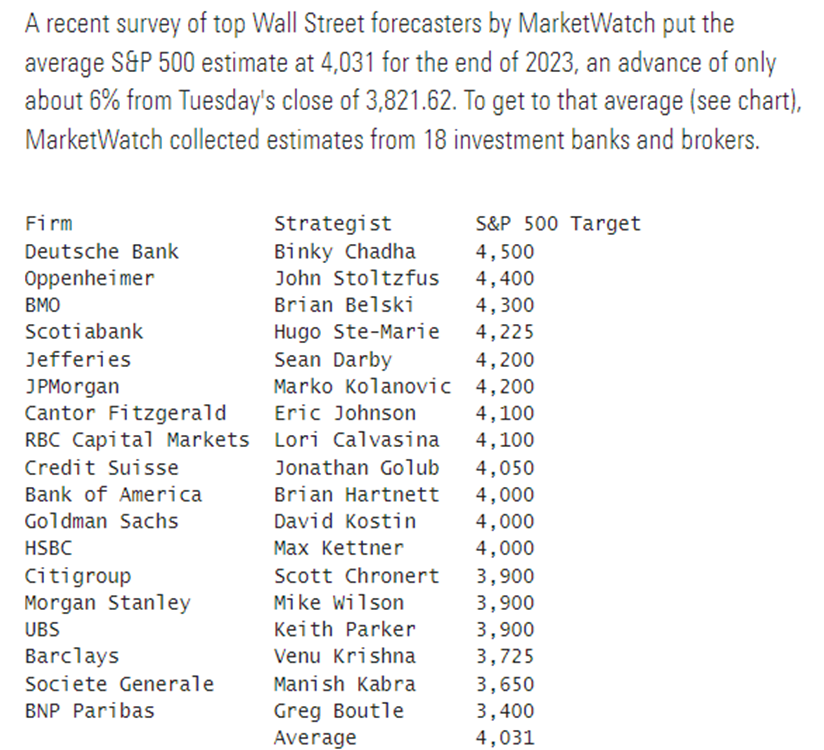 As we head into year-end, you are going to see all kinds of market predictions for 2023, but do yourself a favor and just ignore these like you would a spam telemarketer, heck, the telemarketer might be more accurate.

Happy Holidays to all and wishing everyone a happy and healthy 2023 and hopefully better results for our investments!