For investors this has sure been a long December. Thus, I couldn’t resist one of my favorite songs by the band, Counting Crows as the lead picture. As I write this, the S & P 500 is on track for its worst December since 1931 and is having another “off” day. You will see this factoid mentioned over and over on television, the internet and the newspapers. Unless there is a robust year-end rally almost all asset classes are going to end the year in the red. This means many areas of the bond market, US stocks, International Stocks, Emerging markets, Real Estate, and the list goes on and on. 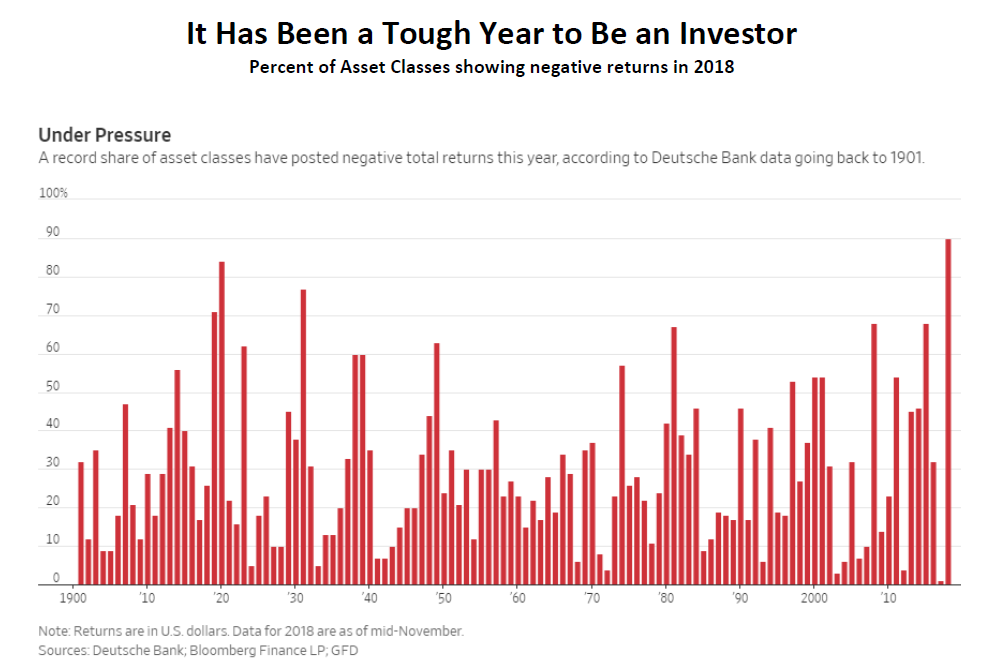 There has really been no place to hide for investors of globally diversified portfolios. The best performing asset class this year is likely to be cash at around 1.5%. The last time cash was the best performing asset class (ahead of stocks, bonds, real estate, etc.) was all the way back in 1994 when Bill Clinton was in his first term, the TV show “Friends” made its debut, and the nation was entranced watching a certain star football player leading the police on a chase through the streets of Los Angeles.

The Fed Reserve raised rates again on Wednesday as it feels the economy is still very strong as they continue to try to get interest rates to a more normal long-term level. What is that level?  According to Jerome Powell, Fed Chairman, probably not too far from where we currently are at, 2.25% - 2.5%. The Federal Reserve still sees the economy as doing very well and is not letting the current stock market tantrum, nor any tantrums via Tweets by President Trump deter them from trying to get interest rates to a “normal” level. We can debate whether they should have left rates as they are. There are some signs that the economy is slowing a bit and we still have the specter of trade wars with China as a distinct possibility.

Remember, interest rates were kept near zero for several years following the Great Recession of 2008-2009, and only started rising in 2016. The Fed wants to at least get short term rates up to around 2.75% so they have some ammunition to lower them when the next recession rears its head. That may mean only one more increase in the foreseeable future. Quick economics lesson here, the Fed raises short term rates when they don’t want the economy to “overheat” and are concerned inflation could heat up. You can liken it to tapping on the brakes, but for the economy. When the economy is slowing, they may lower rates to spur lending and investment, comparable to pressing on the gas pedal.

In our long-term planning with clients, we have anticipated that there will be corrections and bear markets. We have built into our financial plans and asset allocations the prospect that there will be times where the markets do fall and perhaps go nowhere for a couple of years. We have been spoiled the last several years by the docile markets we have witnessed. However, markets go up and markets go down, this has happened all through history and it will happen again. But we will get through it just like we have in the past. Always remember that panic is not a strategy.

For our retirees and those drawing on their portfolios, we generally have 4-5 years of cash needs in short term bonds, money market funds or CD’s maturing in a couple of years, knowing that these funds may not earn stellar returns, but that the funds will be there when they are needed and allows the stock holdings time to recover, since they will not be needed to fund living expenses. When markets recover, and stocks are at better prices they can be sold to refill this “bucket” of shorter-term cash needs.

I will admit, it is no fun to go through market corrections, and when I should normally be in a joyous mood with the upcoming holidays and some time off with family, I am just a little bit less jovial lately.

The economy may slow a bit next year but does not appear to be anywhere near a recession at this time. Economic fundamentals are still very strong and even if they slow down in 2019 it doesn’t mean the economy is going to fall off a cliff. Markets often take things too far too the extremes. In 2017, it probably got overly exuberant as we kept hitting new highs and stocks never went down. Things probably went higher than they should have. Currently, there is a good chance the market is overly pessimistic, and it is lower than it should be.

As the great investor Warren Buffet famously said, “Be fearful when others are greedy, and be greedy when others are fearful.”  But it is the holiday season so maybe we should not be greedy or fearful, just thankful for what we are blessed with.

As always, please contact us if you have concerns or to discuss your situation and if we should consider any changes to ease your stress.