Inflation - Return of the Boogeyman?

For those of you old enough to recall the 1970’s, a couple of things probably come to mind for you. One might be bell bottoms or long lines at the gas pump or maybe even Kojak, but I have a sneaking suspicion that high inflation might be at the foremost of your recollections of that turbulent decade. We are so used to relatively low inflation rates the last couple of decades that it seems implausible that inflation (as measured by the Consumer Price Index (CPI) in December of 1979 was over 13% year over year and actually hit 14.8% in March of 1980. Especially since it has only been averaging around 2% the last several years...

It was only after “Tall” Paul Volcker became chair of the Federal Reserve in August 1979, and began hiking short-term interest rates up over 20%, which had the effect of plunging the economy into a deep recession and caused unemployment to rip above 10%. However, these drastic measures quickly brought the inflation rate down to more reasonable levels of 4% or so on a year over year basis. There were many causes for the great inflation of the 1970’s which are beyond the scope of this article, but if you want a succinct summary go here.

Fast forward to today, and just recently the year over year inflation rate spiked to levels not seen since the recovery from the 2008 recession and before that you have to go back to around 1991 for an inflation rate as high as we just printed. This has sent reverberations across the stock and bond markets as inflation is one of the biggest fears there is for investors and really for almost all people whether they invest or not.

So, what is inflation? It really all comes down to this:  TOO MUCH MONEY CHASING TOO FEW GOODS. Of course, it is not necessarily that simple, but that is a really good way to describe inflation. Right now demand for goods is outpacing supply. We are seeing crazy increases in the prices of used cars, lumber, houses, and commodities. Thanks to the COVID stimulus checks and months of not being able to go out and spend, consumers are flush with cash and looking to spend it. Plus, partially due to the expanded unemployment benefits people are receiving as part of the COVID stimulus, many employers are having to increase wages to attract employees. Increasing wages are another big driver of inflation. Another factor has been the supply chain disruptions due to COVID and other factors such as ransomware shutting down the pipeline in the Eastern U.S. this week, causing gasoline shortages. 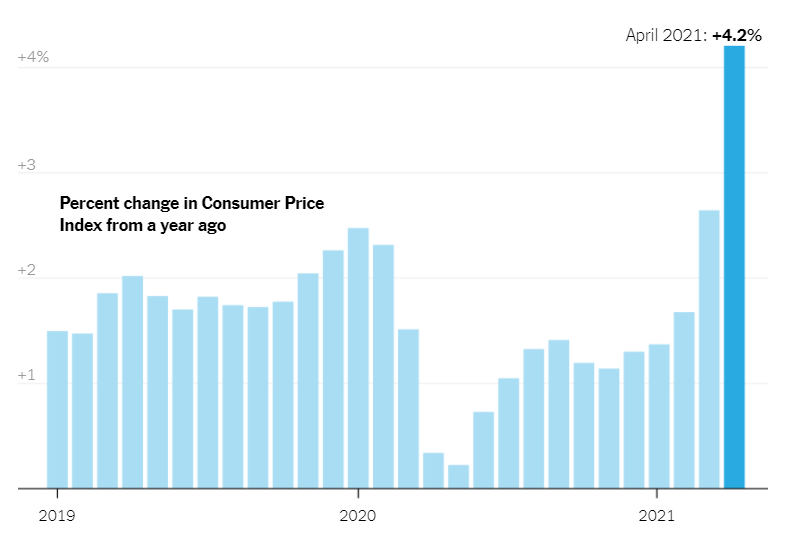 Several economists, including Jerome Powell, head of the Federal Reserve, believe that the jump in inflation is transitory due to the re-opening after COVID and prices being compared to last year’s depressed levels. However, there are a fair amount of investors that feel we are in for a longer stretch of higher inflation. Most of those calling for higher inflation are not calling for the crazy inflation of the 1970’s again, but higher than what we are used to. And, of course, the perma-fear spreaders will be out calling for hyperinflation like they have been predicting for the last 25 years and been wrong the whole time, but I don’t put a lot of credence in the newsletter fear spreaders whose subscriptions go up because scaring people sells, but whose portfolio ideas based on their scare tactics would have left you in the poorhouse.

Still, inflation is something we do need to be concerned about. Inflation erodes the purchasing power of our money. That is one reason that having a lot of cash, certificates of deposit and other ultra-safe investments can feel good, but if you are too conservative for too long, it can really do damage to your portfolio. Just think about earning 0.25% or so on these investments while inflation is running at, say 4% for a couple of years. After a couple years of this, you have seen some serious erosion of your purchasing power. Of course, the interest rate on these safe investments will rise as well, but as we have all seen before, banks seem to lower interest rates a lot quicker than they raise them on savings vehicles.

The Federal Reserve has said they do not want to raise short-term interest rates for a couple of years yet, but if the higher inflation we are seeing now persists, they will probably have no choice but to start raising rates much sooner than that. The Fed’s goal is to have inflation a little bit over 2%. It has been trying to create inflation for several years to no avail as it believes that low rates become self-reinforcing and low inflation leads to lower interest rates, while the Fed would like interest rates higher to have ammunition for the next recession, whenever that is. (The Fed reduces interest rates when the economy is heading into recession to help spur economic activity) However, the Fed has to walk a fine line because if they push rates up too much, they could crush the recovering economy and make all the Federal debt that is being incurred with all the stimulus more expensive to service because the government will have to pay higher rates on new Treasury bonds it issues.

What can we do to try to protect and prepare our portfolios for inflation?

There are a number of investments that can help portfolios weather inflation, but none are perfect and depending on how fast or slow inflation rises, their effectiveness can vary as an inflation hedge. What are some of these investments most investors can utilize via mutual funds, Exchange Traded Funds (ETF’s) or other sources to help stand up to inflation?

Most well-diversified portfolios (I know the ones we manage at Focus certainly do) will almost always include several or all of the above asset classes. Still, each of these may react differently to inflation and just because they have done well in response to inflation in the past does not guarantee that they will again in the future. Just like in life, nothing is 100% certain.

We as investors and consumers definitely need to be aware and prepare for higher inflation than we are accustomed to.