The IRS recently released updates for 2023 changes due to inflation

For the last several years, the annual changes in the tax code for items linked to inflation have been rather minimal due to low inflation the last couple of decades. As we all-too-well know, inflation came roaring back this year and has affected almost all facets of our lives, including tax brackets and certain other provisions.

The IRS just recently posted its changes due to inflation for 2023 income taxes which you will not be filing until early 2024, but it is good news for tax planning purposes that we know now the amounts we will be working with. Here is the actual IRS press release if you want to roll your sleeves up and have some fun.

There are several figures in tax code that get adjusted annually, but there are still many other deductions and credits that do not adjust annually for inflation, which means they become less valuable to taxpayers each year. An example of this is the adjusted gross income (AGI) amount to determine the amount of the Lifetime Learning Credit for those paying for children’s college. It is phased out for single taxpayers with AGI over $80,000 and $160,000 for joint filers. There is no adjustment to increase these numbers nor is there anything in the works. These AGI amounts have been the same for several years, but now adversely affect more taxpayers every year as inflation bumps workers income higher. There are several other more phase outs like this as well that do not get adjusted very often for inflation over the years. Then the various credits such as the amount of the child tax credit, which remains at $2,000 for those that qualify, that do not have inflation adjustments each year, so that $2,000 of credit becomes smaller and smaller each year in real dollars.

There is also the fact that the cost basis on investments purchased does not get increased for inflation over time. This results in essentially paying tax on inflation increases over the years.

As I mentioned earlier, I wouldn’t hold my breath waiting for Congress to work together to come up with a solution to inflation adjust capital gains taxes. 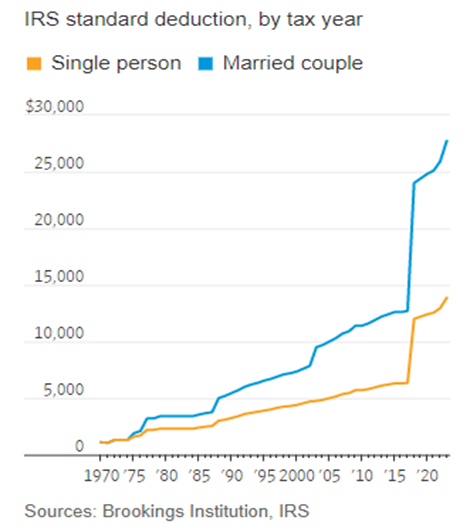 I am going to go through the main provisions that affect the largest amount of people we work with. If you are bored and want to read all the provisions, follow the link above to the IRS press release. SPOILER ALERT: It is a little bit dry and the ending left a little bit to be desired. 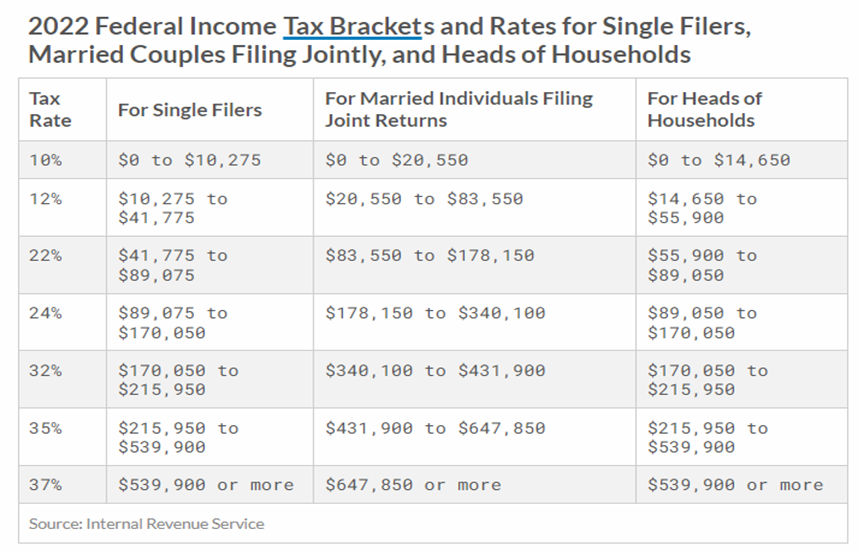 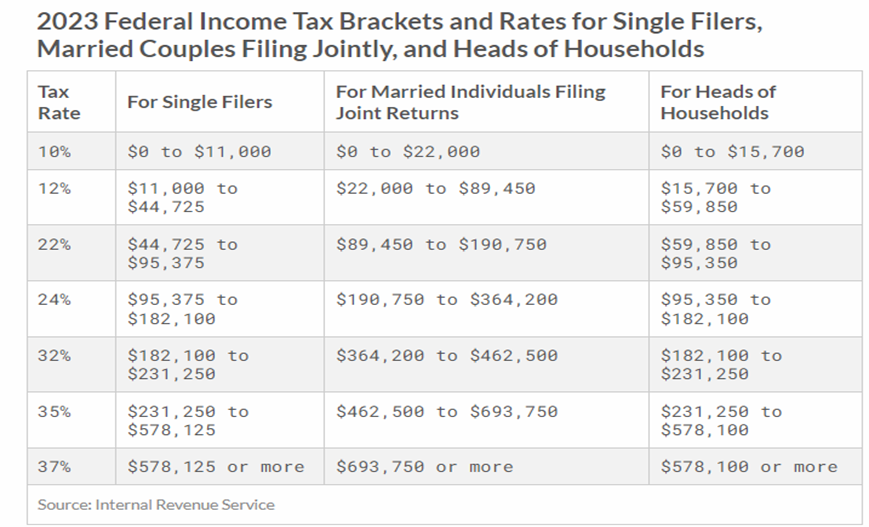 The increases at the top of each bracket come out to about a 7% increase, which is lower than the Consumer Price Index (CPI-U) which increased at around 9% year over year. This is because a provision in the 2017 tax bill uses the “Chained Consumer Price Index (C-CPI-U)” which rises more slowly than CPI-U. Therefore, the inflation adjustments in the tax code are usually a bit lower than actual inflation. Go figure. However, since the law was enacted back in 1985, this is by far the largest automatic adjustment.

As I was in the middle of writing this, the IRS also released the amounts for 401k/403b/457 contributions and those increased from $20,500 to $22,500 for 2023. In addition, the catch-up contribution for those over 50 increased from $6,500 to $7,500, therefore, someone over 50 can now contribute up to $30,000 into these plans in 2023. This is the largest increase in the annual amount ever thanks to the current elevated inflation we are experiencing. This is a great opportunity to bolster retirement savings for those that can do so. If you are working and intend to increase your contributions, don’t forget to make the adjustments as we get close to year-end.

Contributions to IRA’s also got an inflation bump from $6,000 to $6,500 for 2023, but the catch-up contribution does not receive adjustments for inflation and will remain at $1,000 additional. Therefore, someone over 50 can contribute $7,500 into either a traditional or Roth IRA depending on their income levels.

Medical Flex spending accounts (where you can set aside pre-tax money to pay for medical expenses and other health care items) increased from $2,850 to $3,050, however, I have not seen anything discussing raising the Flexible Spending amount for childcare expenses up from $5,000 for joint filers and $2,500 for singles.

The income phase-out limits for Qualified Business income rose from $340,100 to $364,200 for those filing jointly and from $170,500 to $182,500 for single filers. This is a deduction that allows eligible self employed and small business owners to deduct up to 20% of their qualified business income on their taxes.

Last week Social Security released the 2023 Social Security payroll tax thresholds for those working and paying into Social Security, and this increased from $147,000 to $160,200 of wages, a 9% increase. While for those receiving benefits, you will be getting an 8.7% increase starting in January. To see how the current year increase compares to history, and because I thought it was a cool chart, here are the annual inflation increases to Social Security Benefits going back to 1976 (Thanks to Charlie Bilello of Compound Advisors): 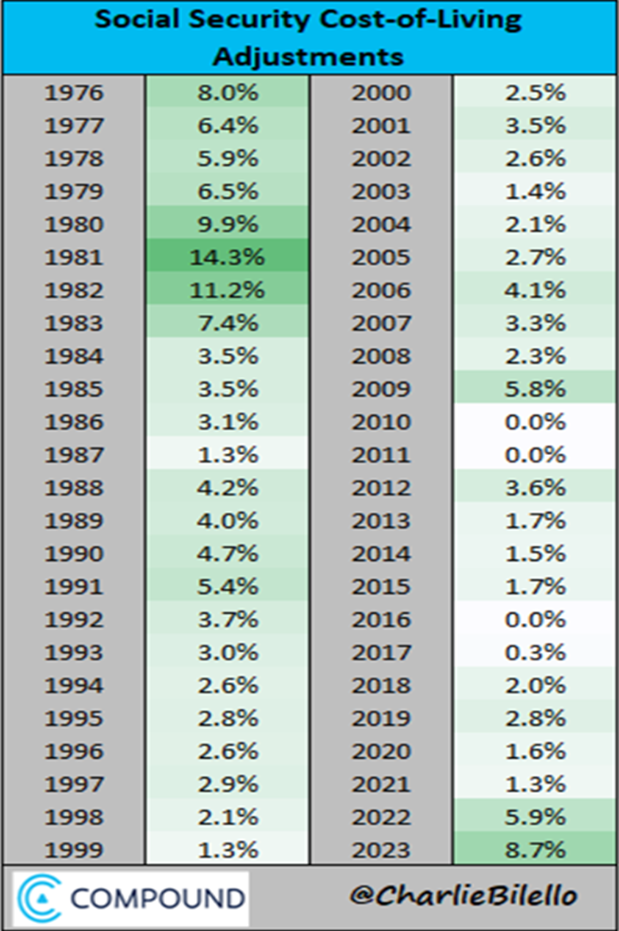 So, those are the main provisions that are subject to inflation adjustments in the tax code. These changes take effect in 2023, If you are working they will show up in lower tax withholding, but you will want to review during the year to make sure withholding is still adequate and to avoid any nasty tax surprise in 2024. For retirees, we will still want to review your tax planning assumptions to make sure tax withholding remains in good standing.

Hopefully, at this time next year, the increases will be much smaller, which would mean that we finally got control of the high inflation that is making things so miserable these days.