7.12%, That is right. There is a way to currently earn 7.12% on one of the safest investments available. You might be saying to yourself, Jon is full of @#$%, because usually when something seems too good to be true it usually is. Once in a while though, there are exceptions to this rule and I am about to let you in on a little secret of how you too can take advantage of this exceptional deal. Sure, there are a couple of minor catches to be aware of, but nothing that is a deal breaker for most people.

With interest rates and inflation running so low for so long, many of us have forgotten about boring ole Series I Savings Bonds, also known as I-Bonds. These were first issued by the U.S. Treasury back in September 1998, when interest rates were much higher and inflation generally was as well. Now, as inflation is really heating up, I-Bonds might be an investment you will want to consider for a portion of your cash holdings.

What are I Bonds?

I Bonds are savings bonds issued by the U.S. Treasury that have 2 components that determine what the interest rate for the bonds are, unlike the more familiar Series EE Savings bonds which just have an interest rate when the bond is issued and remains with the bond for life. That current rate on Series EE bonds is a whopping 0.1%, although they are guaranteed to double in value after 20 years which is a good thing as it would take current EE Savings Bonds 720 years to double in value! I-Bonds, on the other hand, have a Fixed interest rate component that stays with the bond for its life (they pay interest for up to 30 years unless redeemed) plus an inflation component that adjusts every May 1st and November 1st to the current inflation rate as determined by the Consumer Price Index for all Urban Consumers including Food and Energy (CPI-U). This inflation component is what makes I-Bonds special.

Those lucky enough to have purchased I-Bonds in the late 1990’s or early 2000’s are really receiving a bonus right now, because their I-Bonds are earning a combined 10.85% on the compounded balance for those that bought I-Bonds in May of 2000. This is because the fixed component at that time was 3.60%. When you add the current inflation component, you get the 10.85% interest rate. You can see all the historical rates here. (Note: The formula has a little more to it than just adding these components together, I just discussed it this way for simplicity). Thus, if someone purchased $10,000 of I-Bonds in May 2000 it is earning that 10.85% current rate on a compounded balance of over $28,000. Not bad for a risk-free investment.

When is Interest Taxable?

I knew you would ask this, so here are the limitations. There are only two ways that you can purchase I-Bonds. The first is by setting up an account at www.treasurydirect.gov and purchasing online. You can purchase up to $10,000 in I-Bonds per Social Security number or Taxpayer ID per year. Thus, individuals, trusts, and corporations can all purchase I-Bonds. A husband and wife could purchase $20,000 combined each year if they choose. The bonds only come in electronic format this way. Bonds received as gifts count towards the annual limit, however, if bonds are transferred to you due to the death of the original owner, the amount does not count towards the limit.

The second way is by using your tax refund to buy up to $5,000 of I-Bonds. This $5,000 can be in addition to the $10,000 per Social Security number, so if you play your cards right, you could actually purchase up to $15,000 of I-Bonds per year. I-Bonds issued in this format are issued an actual paper bond, just like a Series EE Savings Bond.

I-Bonds can only be redeemed online, although if you have paper I-Bonds purchased from tax refunds, those may be redeemed at your bank. 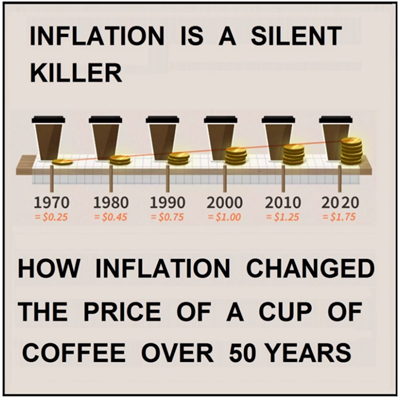 Source: INFLATION IS A SILENT KILLER. According to the IMF, the inflation… | by Ico booster team | Medium

What Happens if We Have Deflation? – If there is a period where we have deflation (prices are falling), and the CPI-U is negative for the 6 months, the I-Bonds inflation component could be negative, but the total return for a period can never go below 0. The last time this occurred was May 2015. If there is deflation and prices are falling, then even earning nil might be good because a real return of 0 is still better than negative in this instance.

Education Breaks – If you redeem I-Bonds in a year when you incur qualified higher education expenses you may be able to completely or partially exclude the interest from Federal Tax. There may be some income and other limitations you have to watch for, but for many, it can be a good deal.

I-Bonds can be given as gifts and can also be set up to purchase via payroll deductions. Everything you wanted to know about them and to set up accounts can be found at www.treasurydirect.gov.

Even though you can only put limited amounts into I-Bonds each year, they are still a great way to preserve and maintain the purchasing power of your cash holdings. Right now, inflation may be with us for some time, so you might consider purchasing some now before the end of the year and then buying more in early January. Sure, the 7.12% rate won’t be around forever, but if inflation only runs at 3% a year over the next couple of years, you still are not going to find anywhere near 3% return on totally safe cash holdings, so they are something to definitely consider if you want to earn a better return on cash and understand the limitations.