Do you long as I do for the ‘Good Ole Days’? You know, back when life was far simpler, less complicated and not as dangerous as it is today. Back when you could have dinner at your favorite restaurant with a bunch of friends, go see a movie at the theater, catch a basketball or hockey game on T.V. or better yet, in person, or ride in a golf cart with your buddy out on the golf course. You remember those days, right, even though they seem to be a distant memory? Of course, I am referring to the ‘Good Ole Days’, those nostalgic times way back in February of 2020.

Remember when you could go get a haircut, visit the dentist, or hug a friend you were meeting at your favorite bar for a drink. Or visit your elderly parents or relatives at a retirement home. Now we have to either let our hair keep growing so we look like Jim Morrison from the Doors, or consider putting a bowl on our head. You have to be very careful visiting the dentist, and you can’t even go to the barber to get your teeth pulled anymore either! Some of us have not been able to visit loved ones in retirement or nursing homes in a couple of months. Our version of going to the bar these days is a virtual “Happy Hour” on Zoom with our friends with cocktails at home. At least no one has to drive home.

Can you remember that far back? I know it was something like 85 or 90 days ago, but that may just as well feel like 85 or 90 years to some of us that have been cooped up in quarantine and shelter in place orders for the better part of the last couple of months. The days all seem to run together and sometimes it is hard to know which day of the week it actually is. For some retired people, this is not much of a difference from everyday life, or so I have been told by several retirees. But for those of us forced to work from home, help with our kids schooling, or just never have a chance to get away, it certainly has been a major change in our lives.

My, how are world has transformed in the virtual blink of an eye. In February, had anyone even heard of the term “social distancing”? Was “PPE” some kind of performance enhancing drug? We all knew more about Dr. Oz than Dr. Fauci. Wasn’t “Flattening The Curve” something that happened on tests in high school and college? Wearing masks in public? That is only something they do in China or in the hospital, right?

Back in February, the stock market was at all-time highs, but in little more than a few weeks had dropped 30% or so before recovering a little more than half of that drop by today. It was about the fastest the market has ever dropped that far that fast. Volatility quickly rose to levels higher than those seen in 2008-9 and even the Great Depression. Hardly any asset class except cash was affected, even ultra-safe treasury bonds had a couple weeks of significant losses before the Federal Reserve stepped in to save the day.

You could get almost 2% on your money market accounts then, and maybe a little over 2% on a one year Certificate of Deposit (CD). Just 90 days later, the money market interest rate is essentially 0%, and if you are lucky you might be able to find a one year CD and get about 0.35%.

Do you recall, in the ‘good ole days’, way back in February, when the unemployment rate was at record lows, and within a matter of a few weeks as COVID shut down the country and the economy, is now at highs comparable and even exceeding the Great Depression? Check out the right side of the front page of the New York times (below) from over the weekend showing the extent of job losses on an historical basis. 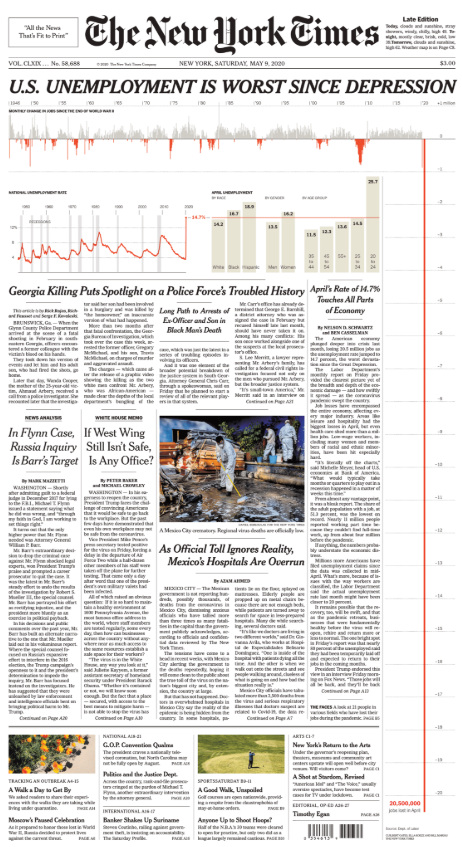 It has definitely been a bleak last couple of months, but there is reason for optimism as well. It appears the curve is flattening, some states are starting to re-open for business, a drug called Remdesivir is showing at least some promise to help treat COVID, and the world is working around the clock to try to develop a vaccine.

The markets have staged a sharp recovery, but still have a ways to go, but at least seem to have stabilized as we are not seeing the huge up and down swings like we did in March. That is a good sign, markets moving up and down 5% a day is not a good thing. Of course, there is still a lot of uncertainty out there and we don’t know when a lot of people are going to start getting their jobs back.

Many people think the stock market is detached from reality. And maybe that is the case, but the market is a forward looking mechanism that anticipates outcomes several months into the future in determining prices. That is why, the market has gone up on those days when the job losses were coming in at 6 million people a week. Those awful numbers were discounted back in March when the markets were crashing. Markets now are anticipating the country re-opening and the economy getting back on its feet. Only time will tell if that assumption is right.

It will likely take a couple of years to get back to what we might consider normal, hopefully sooner. But there are probably going to be a lot of things that will never go back to how they were back in those glory days of February, and maybe that is a good thing. As Billy Joel once penned in his song, “Keeping the Faith”, “Say goodbye to the oldies, but goodies, because the good old days weren’t always good and tomorrow ain’t as bad as it seems.”