If you had went to sleep at the end of September of last year and just woke up, you might think the markets have been pretty boring these last 12 months. Especially, if you just picked up a paper and saw that the S & P 500 was currently around 2900, which is the same level it was in September of 2018. (I don’t like to use the Dow Jones Index because it's only comprised of 30 stocks, while the S & P 500 is a better representation of the market since it contains about 500 stocks). But for all of us that have not been zonked out for the last year, we know that it's been anything but boring as shown in the chart of the S & P 500 below. 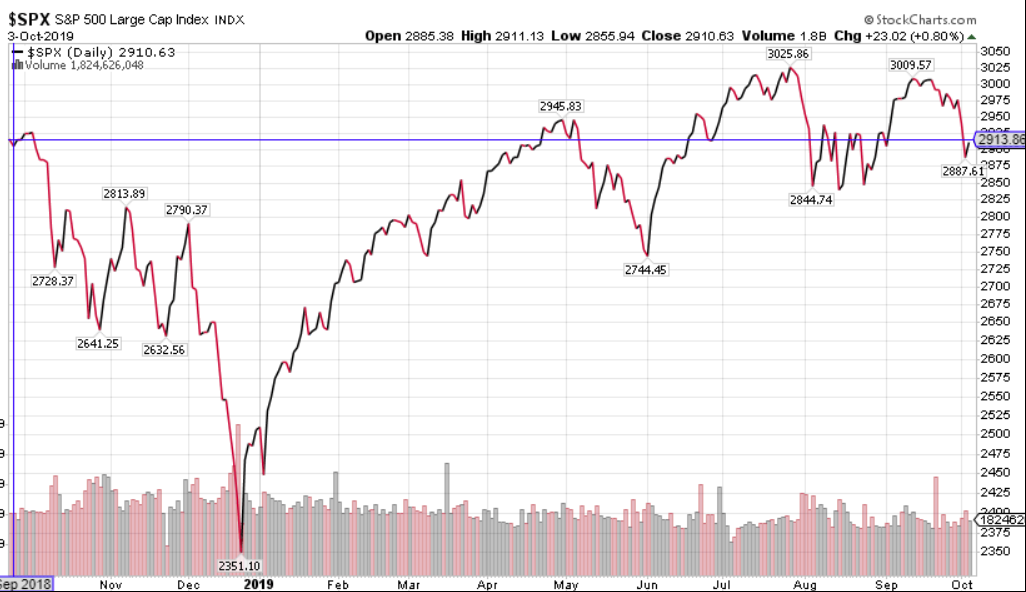 There is a myriad of reasons that you could blame for all the market volatility we have experienced over the last year (Trade Wars, the possibility of a Trump impeachment, an inverted Yield Curve, a slowing economy, recession fears, etc.). But then again, there always are a slew of concerns that markets must contend with. At any point in time in any given year, there are always some kind of issues that worry the markets. Just pick up any old Wall Street Journal from a few years ago and you can read about some long forgotten ‘worries’ that were at the forefront at that time. Heck, if there weren’t any concerns, that is when I will be very worried. The fact of the matter is, market volatility is common and throughout history the stock market has bounced around quite a bit. There is no reason for that to change now. We have just been spoiled by the very low volatility the markets have exhibited the last few years.

I have been saying over and over for some time in client meetings and in my writings, that since we are 10 years into a long bull run in stocks and expansion of the economy, that we may be due for a few years of the markets not making much progress. Also, bond yields are very low, so it will be difficult to generate much return from bonds either. There will likely be several periods of market ups and downs the next few years (like we have been experiencing the last year and a half), and it doesn't mean that a market crash is imminent, it just means investment returns are likely going to be more challenging to come by in the near future especially compared to what we are used to seeing the last several years.

However, we believe that having a globally balanced, broadly diversified portfolio will improve the chances of still getting acceptable results going forward. Have a look below at how several different asset classes have done over the last year or so: 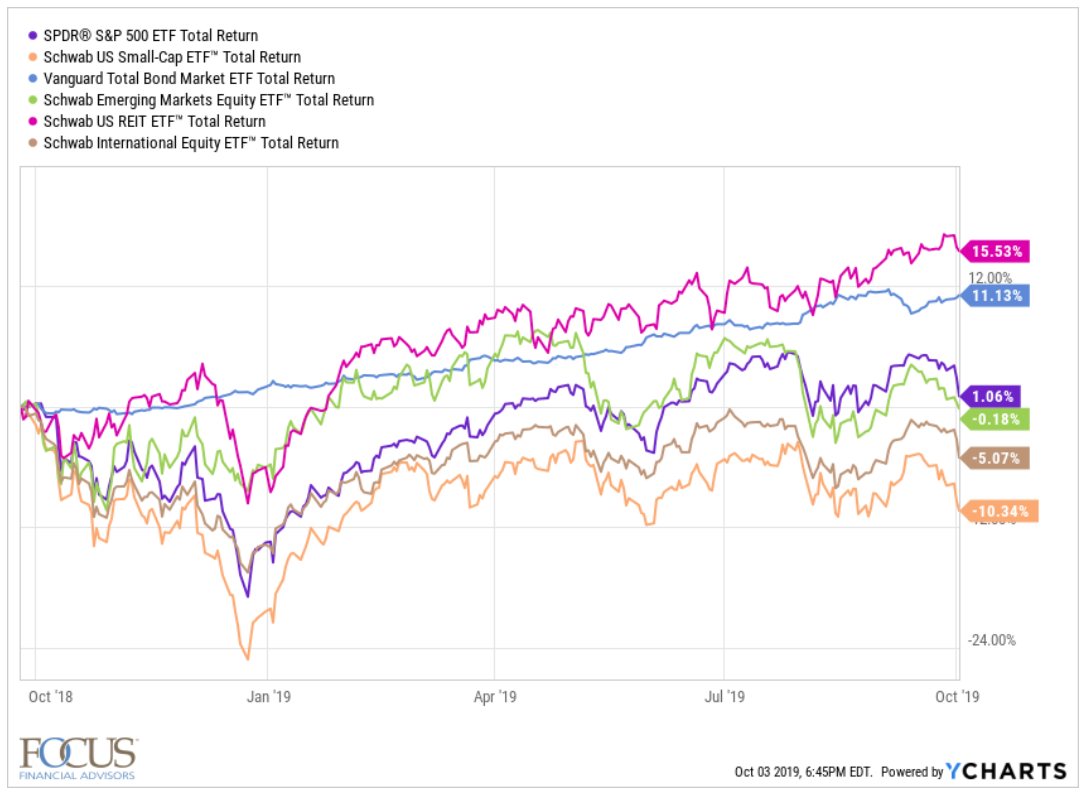 You will notice that there have been some winners (REIT’s which is Real Estate) in pink, and Bonds in blue. These are up over 15% and 11% respectively. Other areas, such as preferred stocks have had a good run over the last year or so as well. The S & P 500 is shown in purple and is up just over 1%, emerging markets are shown in green and are basically flat. International markets are down about 5%, and small US stocks have been hit hard over this period and are down over 10%. But this also shows you why you want to stay diversified and utilize multiple asset classes in your portfolio.

Some areas of the market such as Emerging Markets and Large International stocks have lagged the U.S. markets handily for the last decade. They may be poised to start outperforming the U.S. over the next several years as their valuations look intriguing and long-term growth prospects in emerging markets are optimistic. Having exposure to these areas may end up improving performance in the future, even though they have not helped much over the last several years.

What it all boils down to is that we may be headed for a period of below average market returns for stocks and bonds. This has occurred several times in the past and having a broadly diversified portfolio that includes many different asset classes will give investors a good chance at still generating decent returns. As investors, we must keep our expectations in check. In reality, no one knows for sure what the markets are going to do tomorrow, let alone a couple of years into the future. It is entirely possible the economy and markets could continue rolling on for some time, or a recession could start next month, we just don’t know for sure.

If only we had that crystal ball that would let us know!