Are we seeing early signs of inflation easing?

It sure has been a long year for investors and consumers, even though we are only half-way through the year. We just had another miserable month in the stock market, with the S & P 500 dropping 8.4% during June, while the Bloomberg U.S. Aggregate Bond Index fell 1.2%. Inflation is up around 9% so the price of everything seems crazy right now. 2022 will be remembered in the same vein as those other illustrious years in our memories such as 2008, 2000, 1987, 1973-74, etc. What doesn’t kill us, makes us stronger.

However, there are early signs that inflation may be peaking or has already peaked, which is the first step on the road to recovery and a bit of normalcy in our lives. These figures are not yet included in the official published inflation figures released by the government last month, but should start showing up soon. Let’s take a look at a few charts that I share with clients in our meetings that provides some evidence:

Commodity prices across the agricultural, energy, & metals sectors are falling, and falling fast. Eventually, this will have to trickle down into goods we purchase. Even gasoline has shown signs of prices coming down.

Fertilizer prices which are a large input for food prices have fallen over 30% in the last couple of months:

Prices for used cars, which have soared over the last year or so, are beginning to come back to earth: 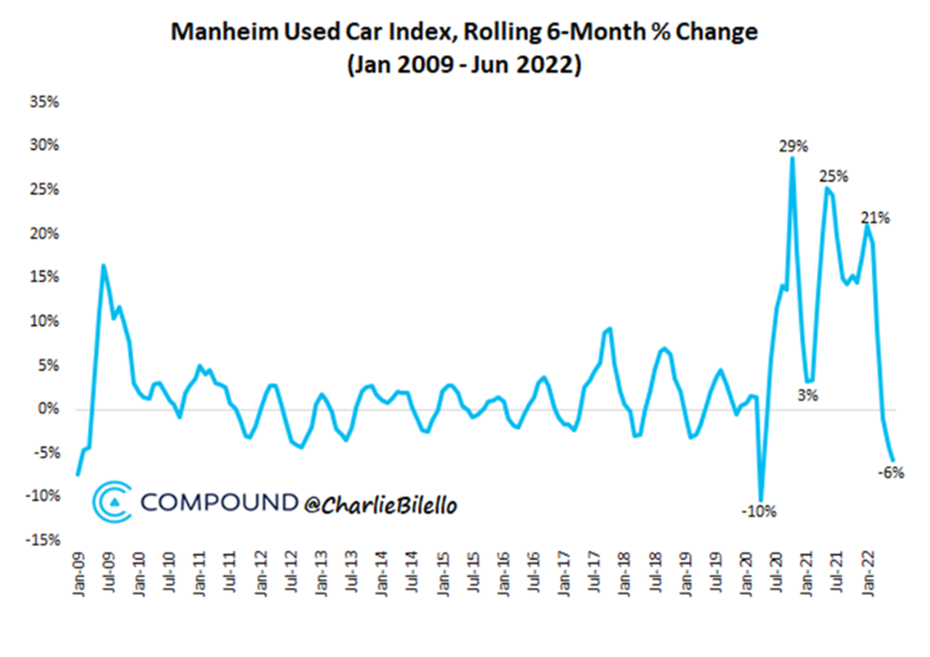 You have heard the stories of all the cargo ships waiting to unload off the coast of Long Beach, CA, because there was not enough labor to get the job done. There are a lot less ships waiting to offload now. 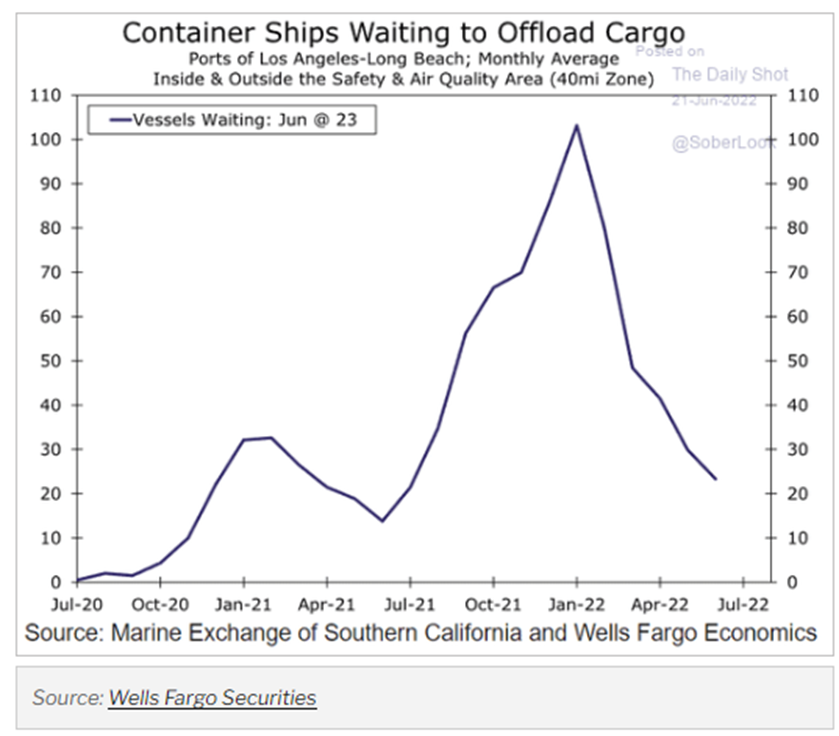 Inventories are Building Up:

We have all been living through the dreaded “Supply Chain Issues” over this last year, but with China opening up from COVID and the consumer starting to slow down their spending in anticipation of a recession, companies such as Wal-Mart and Target are reporting that inventories are starting to build up. Higher inventories, mean more goods available, and eventually, probably too many goods. When companies have too many goods to unload, they start cutting prices to move these goods.

Consumer Spending is Starting to Drop:

The consumer is starting to pull back on spending:

These are all indications that we may be close to peak inflation and for prices to start coming down soon. Can you imagine how excited we will be when gas may “only” be $4 a gallon? However, the Federal Reserve is still intent on raising rates to cool the economy to curtail inflation and as I mentioned before, they seem willing to push until there is a recession if it means stopping inflation. A Recession is the lesser of two evils.

Since inflation is really our biggest worry as investors and consumers, this may be an acceptable trade-off. Once inflation has cooled, and the economy retreats, it can function as a reset for the economy and markets to recover. It is no fun going through a recession as there will be job losses, an economic slowdown, falling housing prices and difficult market conditions for stocks, but can actually be good for bonds as interest rates fall. But, recessions are a normal feature of the business and economic cycle and help cool off the excesses, speculation and froth that can build up in markets and cause “bubbles”, which are not a good thing.

Personally, I think all the talk of a mythical “soft-landing” (reduce inflation while keeping economy out of a recession) is rubbish. The Federal Reserve has never been able to actually achieve a soft-landing in the past and in reality will likely continue raising interest rates until the economy is in a recession, and then start cutting interest rates to spur the economy that has slowed too much.  This is the way that it has worked the last several decades and since they were so late to acknowledge inflation, this is the likely path things will take.

I am telling clients currently to be prepared to “tighten their belts” for a time and if there are large purchases that can be put off such as new vehicles, large home improvements, new homes, etc. consider waiting 6-12 months or maybe just a bit longer and there is a good chance prices will be substantially lower and bargains can be had then as the likely recession takes hold and things reset a bit. Holding onto some extra cash these days is not the worst thing you can do. Have a great 4th of July!