We have been waiting the last several months for the inevitable stock market correction. Remember, stocks do not just go in a straight-line upwards, although it seems like that has been the case virtually the entire time since we came out of the COVID bottom at the end of March 2020. As you can see in the chart above of the S & P 500 over the last 12 months (Remember, if you want a better picture of the market, the S & P 500 is much better than the Dow Jones index) it has been a nice smooth ride up for investors over this time period. But there is also an old saying among investors that “Stocks take the escalator on the way up, but the elevator on the way down.” As I write this, we are having the worst day in the markets since all the excitement the market had in the COVID crash last February and March.

It probably makes sense that we would start seeing some “excitement” in the markets in the month of September, after all, it is the worst month for stock market returns. Since 1928 it has generated an average stock return of -0.99% and has shown losses 54% of the time over that period. Since 1950, it has had 32 up years and 39 down years with an average return of -0.62%, You can play around with monthly historical market returns with this calculator.

Many market participants have for several months now, been expecting a correction or at least some indigestion in the markets and going into the fall we have a number of catalysts (which I will get into below) that are finally causing that long awaited sell-off in the markets. As I write this, the S & P 500 has fallen about 4.26% since the start of the month, so we have not even hit a 5% correction yet, and of course the media is freaking out as the market has been way too calm for them and they need some excitement to bring eyeballs in. 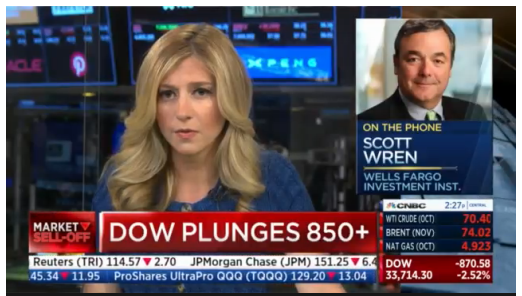 It's been a while since CNBS could trot out the scary headline in red! FEAR SELLS.

First, let’s refresh our memories as to how often stock market “corrections” occur. The following graphic is a couple of years old, but still very informative, as not much has changed with these figures: 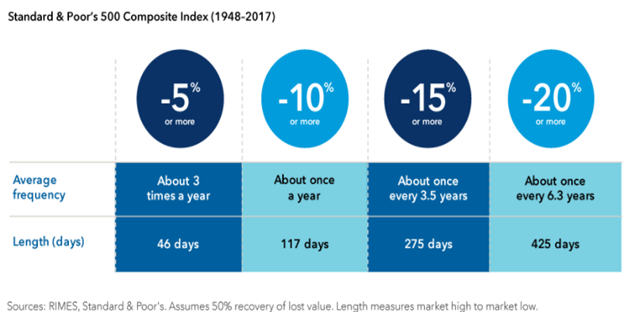 As you can see, on average there are about three 5% corrections in the market each year, we have gone over a year without one, but it looks like we might finally have one. Also, there is a good chance the current market sell-off could go further then -10% which usually happens about once a year.

What are the Possible Catalysts for a Market Correction?

As you can see there are plenty of events for markets to be concerned about over the next few months. But on the positive side, markets also need a “wall of worry” to continue to advance in the longer term. Once the markets can come to grips with the above issues, there is a good chance it can resume the uptrend. However, we also need to be prepared for a 5%, 10% or maybe even a 20% correction in the near future. As long-term focused investors, this is par for the course and while it may not be fun to endure while we are in the middle of it, we will eventually get past it.