How do Stock Markets Perform Depending on Who is in Charge?

Many of us watched the raging dumpster fire that passed for a Presidential Debate on Tuesday night. But, then again, hasn’t this whole year of 2020 been a dumpster fire? Maybe a wrestling match between the two would have been better! Wouldn’t it have been neat to see Biden jump off the top rope with an” elbow smash” or Trump execute a perfect “pile driver”.  We probably would not have learned any less than we learned at the “debate”. Hopefully, the Vice-Presidential debate coming up next week will be structured a little differently so that we can hopefully have a real debate with a lot less talking over one another and a lot more civilized conversation between two adults.

So, a question I get a lot these days is should we be worried about the stock market depending on who gets elected President?

The asset management firm, Natixis put together some good information recently looking at this very question, and also how things look depending on what party controls the House and Senate? They compiled data for the S & P 500 going all the way back to 1928 and looked at the market returns depending on the permutations possibly with who controls the Presidency, House and Senate. 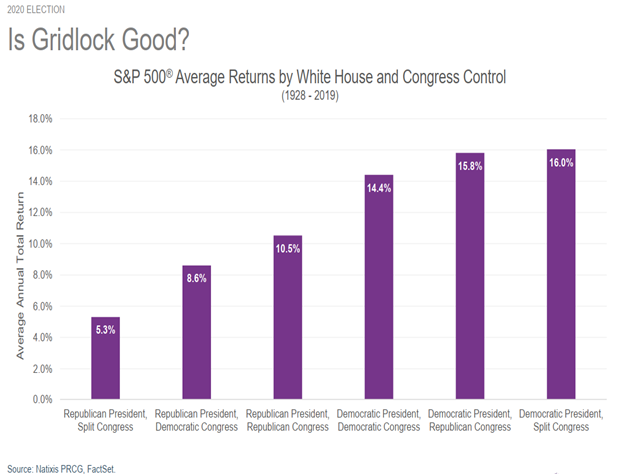 As you can see below, it seems like the lowest annual average returns of the S & P 500  (5.3%) occur under the situation we are currently in with a Republican President and a split Congress. Ironically, the best average annual returns (16.0%) occur with a Democratic President and a Split Congress, a scenario we could possibly see soon, if Biden maintains his lead in the polls and Republicans maintain control in the Senate.

It is interesting to note that the 3 highest return scenarios occur with a Democrat in the Oval Office. (Just stating the facts here and this is not an endorsement of a particular candidate). Of course, the underlying health of the economy is usually the primary reason for company earnings and therefore, stock market returns. Although fiscal stimulus can play an important role as well. The President often gets a lot of the credit (and blame) for what the stock market does, when in reality, this has much more to do with the condition of the underlying economy which is often “inherited” from one President to the next.

In the first year of a president’s term, the market is up an average of only 2.6% when the new president is a Republican versus a whopping 22.1% when he or she is a Democrat. (However, in Trump’s inaugural year of 2017, the S & P 500 ended up 19%) Often in inaugural years, investors begin to realize the new president may not be able to accomplish all that was promised on the campaign trail. Presidents can rarely pass legislation exactly as promised—or at all in some cases—as new bills must go through Congress, which can water down the final product. And once elected, presidents often shift their focus towards re-election and winning over the independent voter. If they don’t moderate once in office, they risk losing popularity. Eventually, markets realize the new president may not accomplish so much and markets generally respond positively as uncertainty fades.

I also remember back in the fall of 2016, many pundits clamoring that if Trump won the election the market would drop by 10%-15%, but the exact opposite occurred and the market rallied strongly in the weeks following his election.

The truth is, that you generally don’t want to make large portfolio moves because you are worried about who will be President. For example, those that sold when Obama took office back in 2009, probably regretted it, because the market had a good run under his two terms, and conversely, when Trump was elected in 2016 and you bailed out because pundits warned the market would drop if he won were proven wrong as well. No one really knows for sure and the market is going to do it’s best to make the largest amount of participants wrong. Therefore, it is wise to have an asset allocation that is designed to meet your long-term goals and objectives and stick with it.

Sure, it will be interesting if Biden does win as he wants to roll back a number of the tax cuts enacted under the Trump administration and raise taxes on the wealthy and this may have an effect on the markets at some point. But Democrats would be foolish to look at enacting possible tax increases until the pandemic is behind us, and the economy has recovered from the toll the virus has taken or they risk delaying or snuffing out an economic recovery. Plus, if Republicans do manage to hold on to the Senate, it will be that much more difficult for Biden and the Democrats to roll back the Trump tax cuts and enact other legislation because we will have more of the gridlock that we have become accustomed with the last several years..

However, if there is a “blue wave” in a few weeks with Biden winning and Democrats gaining control of the Senate it will be interesting to see how the market reacts. So far it does not seem all that worried.