Do you recall all the hubbub in the media and in print about the Yield Curve Inverting last year and that a recession was probably just around the corner? At the time the stock market was rolling, the housing market was booming and unemployment was just about as low as it had ever been. As Alfred E. Neuman always said, “What, Me Worry?”

Fast forward to today, and we are in the midst of a pandemic. 40 million people have become unemployed virtually overnight due to the virus shutting down not only our country, but a good part of the world. The stock market has cratered, most businesses are seeing substantial reductions in revenues or closing altogether and we are most certainly in the midst of a slowdown that will only be confirmed as a recession after the fact by the National Bureau of Economic Research (NBER). (The definition of a recession is 2 consecutive quarters of decline in Gross Domestic Product (GDP).

How did the yield curve know that this was about to happen? 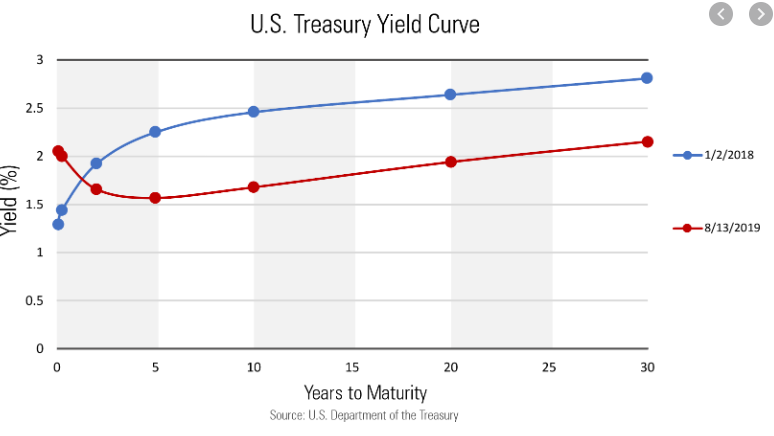 You probably recall hearing that the last several recessions going back to the 1950’s were preceded by an inverted yield curve. Usually, once the yield curve inverted a recession occurred within about 18 months or so.

So, why does the inverted yield curve indicator work so well? Here is an easy to read explanation by Duke University Fuqua’s School of Business Professor, Campbell Harvey:

The yield curve inverted last year because we were starting to experience a gradual slowdown in the economy, even though things like unemployment were extremely low and housing was still strong. There were other signs in the economy that some areas such as manufacturing were starting to slow down and that is why the Federal Reserve started cutting short-term interest rates last year in an effort to “juice” the economy a bit and avoid a recession. The yield curve inverted because as Professor Harvey stated above, people started believing there was an increased risk of recession coming and were aggressively buying 10- year Treasury Bonds, which drove their prices up and lowered their yields.

However, as we neared the end of 2019 and the first month of 2020, economic activity started perking up and the chances of a recession started to decrease as seen in some of the indicators at the time. Little did we know that the coronavirus that had been lurking in China would bring our economy and our lives to our knees in just a couple of months.

We will never know, had the coronavirus not appeared, would we even be heading into a normal recession? Or were the economic improvements we saw at the end of 2019 and beginning of 2020 a sign that it was just a gradual slowdown and a recession had been averted. Just like in 2015 when a slowdown did not turn into a recession. (However, the yield curve did not invert in 2015.)

In reality, the yield curve had no idea that a recession caused by the coronavirus was about to occur. That was just a coincidence and sure makes for a good headline! But, it does look like the excellent track record of the Inverted Yield Curve is going to stay intact.