I keep thinking I am in the middle of a bad dream and that I am going to wake up and we are back to how life was just a few weeks ago. But, alas, that is not the case as this nightmare that 2020 has become is still ever-present. The news about the virus keeps getting worse from a headline standpoint and will continue to do so as we finally are testing more people for the COVID-19 virus.

Sure, that is bad news, but it also can be considered good, longer-term news. The large amounts of testing is what caused the South Korean and Chinese virus numbers to increase so much in February, but also a big part of the reason they were able to stop the spread of it. Now that we will be doing much more testing here in the states, practice increased hygiene and embrace social distancing, we have a chance at having good results here in the U.S.

Josh Brown who writes the blog, The Reformed Broker, and was a great source of information back in the Great Financial Crisis of 2008-2009 wrote the following: 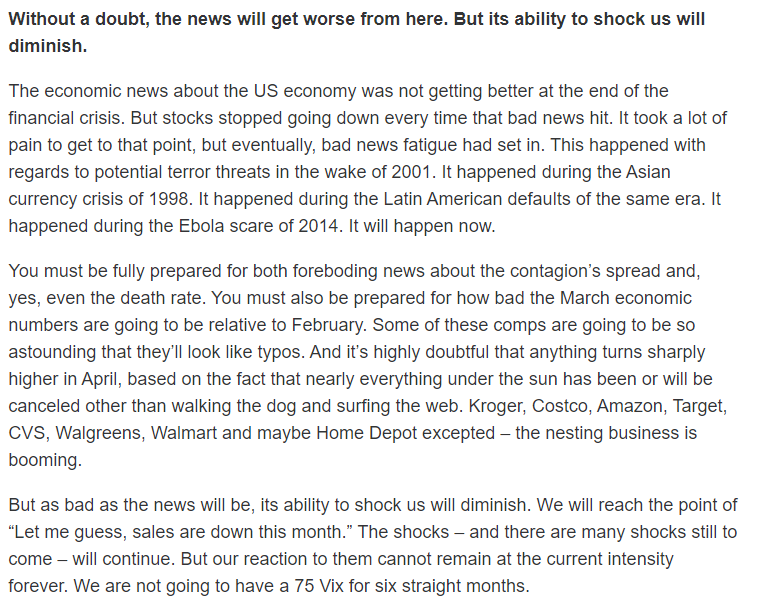 I think he is spot on in his analysis and we will soon be at headline fatigue and the markets will as well. It appears the markets are preparing for absolute worst case scenario which is leading it to most likely overshoot to the down side. Remember, markets almost always over-react both on the upside and on the downside. You have to think of it like a rubber band that is being stretched but snaps back to its original status.

That is not to say that what we are experiencing in the markets is not scary. It definitely is, but we have now reached a point of fear in the markets even greater than at the extremes of the turmoil in 2008-2009. It is at least a little bit comforting to know, that due to the regulations that were enacted in 2008-2009, our banks and financial institutions are in much better financial shape than they were then.

It is also interesting to look back at 2 of the largest pandemics of the last 100 years or so and look at the effects they had both on loss of lives and on the markets.

The first, and the one that all pandemics are compared to, was the Spanish Flu outbreak of 1918-1920. It is estimated that it killed approximately 40-50 million people and infected about 500 million people worldwide. It was truly a nightmare scenario because it didn’t affect older people as much as it did younger folks. The mortality rate was many times what the COVID-19 rate currently is and it did put the U.S. economy into a recession. The S & P 500 index fell by 24.7% in 1918 and bounced back by 8.9% in 1919. When you consider the fact that the S & P 500 has now fallen more than 30% from it’s highs, it sure looks like things may be getting overblown.

Now that the U.S. appears to be serious about slowing down the COVID-19 there is reason for optimism that we will be able to slow the outbreak so that are hospitals and health care workers do not get overrun. Cities are shutting down bars, restaurants and other gathering places and this should all have a positive effect on the outcomes.

When you look at the market reactions to these two previous pandemics, I really think there should be cause for optimism in the mid to longer term time frame. The 1918 outbreak was much more serious than what we have now, yet the markets today have fallen much more dramatically then during that dark time. Of course, there is no guarantee that just because the markets have already fallen more than in these other two episodes, but our markets have been very resilient historically.

We have to remember that the markets are a forward discounting mechanism. It is trying to anticipate what is going to happen, not necessarily what has or is currently happening. That is why it often goes much farther up and down than it should. It is also a reason, that the market could start going back up before too long even while all the current news is awful, because it is discounting the longer term future.

It is going to be a wild ride for the next few weeks, but we are going to get through all this, as we have for other pandemics. If you have the time, go back and read the links on these pandemics mentioned above. It really is fascinating.