I have been thinking about this a lot recently during these stressful times we are currently enduring. How did we not see the COVID-19 virus causing such an enormous economic and health crisis not only here in the U.S. but around the globe?  Of course, we all saw back in January that China grinded to a halt as the authoritarian Chinese Government imposed draconian steps to snuff out the Coronavirus. But it all seemed so far away and we could recall many of the other health scares of the last several decades that hardly affected us, such as:

The 1968-69 “Hong-Kong flu” (H3N2 virus) killed a million people globally.  It didn’t stop the economy in its tracks or trigger social distancing.  The grocery aisles remained full and people still went to school and work.

Remember the “Bird flu?”  The H5N1 epidemic caused a worldwide scare, but once again, the economy moved on without a ripple.  Then came SARS—Severe acute respiratory syndrome, caused by a novel bug called a coronavirus.  In 2003, it roared out of Asia and spread to more than two dozen countries, infecting more than 8,000 people and killing 774.  But again, the social/economic impact was minimal.

The 2009 “Swine flu” (H1N1 virus) originated in Mexico, mixed with a Eurasian swine flu virus from Europe and killed more than 18,000 people around the world.  Turns out 2009 was a good year for the markets and the economy, as it recovered from the Great Recession.

More recently, outbreaks of a very scary virus called Ebola, which has flared up a number of times going back to 2013 in Western Africa. It has a very high fatality rate and is very contagious, but it didn’t affect our day to day living here in the U.S. or other parts of the world besides Western Africa.

As you can see there have been several health scares that originated elsewhere and caused substantial impacts on people and countries around the globe, but really had little, if any effect on most areas of the developed world. So why would we think COVID-19 would be any different? Why would we think it would lead to the U.S. and many other countries being essentially shut down? Why would we think it would lead to the huge disruptions in our daily lives? Why would we think it was going to lead to the fastest stock market decline in history? Truth is we really couldn’t have known. It sounded very similar to all the early reports we heard regarding these other pandemics. We heard these before over the years, we also heard many times that the virus would be contained and assumed that would be the case just as all the other previous outbreaks had been contained.

In many ways it is like the story of the “Boy Who Cried Wolf”. We heard these scary reports before and nothing really became of any of them and just like in the famous fable by Aesop, after repeatedly hearing the term “pandemic” in place of “Wolf”, we tuned it out, just like those in the story did until the wolf came and ate the flock of sheep.

It is understandable, we hear so much dire news in our lives, that unless it directly impacts us, we often do not pay much attention to it. With our lives as well as our investments, if we jumped every time we heard a disturbing story that could possibly affect us, we would have no sanity, and if we sold all our investments every time we thought something might have a negative effect on things, we would surely torpedo our long term plans, not to mention rack up a lot of unnecessary taxes, and then be tasked with when to put all that money back to work.

In hindsight it is easy to look back and say we should have seen it coming. Just as you could have at 9-11 or the Financial Crisis of 2008. In retrospect there were warning signs for these two events as well as COVID-19 that caused us all so much distress, but they only really become visible after the event has occurred. They are very difficult to ascertain in real-time.

But I have come to the realization, that I can’t beat myself up and say I should have seen it coming. I cannot control these events and I should not let them control me. Neither should you. We all have to focus on the things in our lives we can control and try not to expend a lot of energy worrying about the events in the world that we cannot control.

The markets have recovered a bit from the extreme sell-off of the last month and have rallied quite a bit in just the last 3 days. But, these types of extreme moves are indicative of a bear market environment that we are now in. A normal market does not go down 20% in one week and then up 15% the next week. However, these moves are normal in bear markets, and are actually considered part of the bottoming process. This process does not occur overnight, and will likely take several weeks, if not months to complete. There is a very high probability the current rally will reverse at some point. Bear market rallies are notorious at luring people back into the market and then pulling the rug out from under them. There is going to be plenty of time to put cash to work and rebalance portfolios, and you have to be careful chasing large moves to the upside in the midst of a bear market.

In fact the largest upside stock market moves are almost always made in the depths of a bear market and/or recession. If you look at the list below, all of the largest daily gains have been made in years associated with bear markets and recessions, 1929, the 1930’s, 1987, 2008 and now 2020. You don't see any days in here from all the healthy bull market years we have had, just the years when we were in crisis. 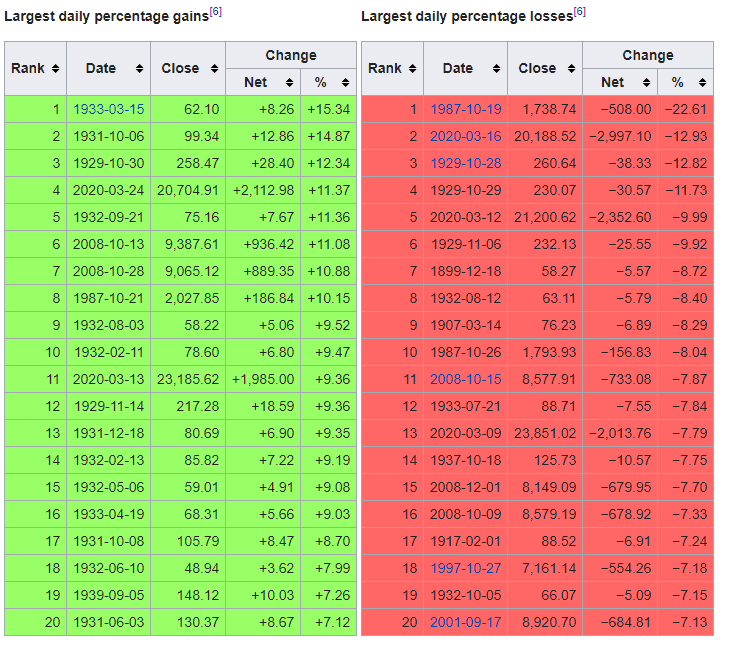 The news is likely to get worse with the COVID-19 pandemic, the unemployment claims have already blown away any historic comparisons, and we are going to almost certainly go into a recession. It really is inevitable with much of the country essentially shut down. After this current rally, the market may attempt to re-visit the lows of last week, and that is a normal bottoming process. The key is to watch the volatility subside and until the market stops moving up or down 5% or more each day, we will be in this unsettling environment.

However, the volatility and huge market swings will eventually subside even though the news is still awful, and the market will likely start finding some traction and begin the recovery process. This has happened in virtually every other bear market and recession and will happen again. The government and Federal Reserve have also injected unprecedented amounts of stimulus into our economy, that will likely eventually lead to a robust recovery at some point, but we will have to be patient.

For now, take care of yourself and your loved ones, get plenty of exercise, learn a new skill, try to keep stress to a minimum, and take time to appreciate everything you have in your lives.