Why is My Bond Fund Losing Value, and What Should I Do?

My last blog focused on The Federal Reserve raising short-term interest rates and discussing the effects on all aspects of the market, economy, loans, etc. Since most investors that hold bonds and bond funds are looking at their statements lately and seeing some pretty hefty declines in their bond funds which are usually the safe, boring part of their portfolio, I think it is a good time to discuss the short and long-term effects rising rates has on your bond funds. I am going to attempt to stay away from getting too nerdy and into a lot of the complex terminology of the bond market and we are not going to get into discussion of the Inverted Yield Curve at this time.

As you see in the above chart of 5 common bond funds investors may utilize in their portfolios, it has been a tough year for bonds (Actually a tough two years, as 2021 was also a negative year for bonds after going the last 43 years with only 3 negative years). Let’s discuss why these bond funds can have such different results and also what does the future hold for bond funds and why now is probably not the time to bail out.

How Do Changes in Interest Rates Affect Bonds?

As a reminder, bond prices increase when interest rates are falling and bond prices fall when interest rates are rising. Interest rates (as measured by the 10-year Benchmark Treasury Rate) have moved up sharply from the start of the year from 1.51% at the start of 2022, to 2.61% where they stand today on April 8. As you can see in the above chart some bond funds have fared a lot worse than others. Why is that? Ok, I am going to throw one nerdy bond term at you and that is DURATION. You may be asking, what in the heck is duration?

Duration – Is a measure of the sensitivity of the price of a bond to a change in interest rates. A bond or bond fund with a higher duration is more sensitive to interest rate changes than a bond or bond fund with a lower duration. It is a figure, represented in years, that represents the time that it will take for you to receive the equivalent of a bonds price in the form of interest (or coupon) payments. (For a bond fund, it is the average of all the underlying bonds, the fund holds).

Duration is different than maturity, in that maturity measures when bonds will mature or return their principal to the investor. The bond’s duration will always be less than the bond’s maturity. 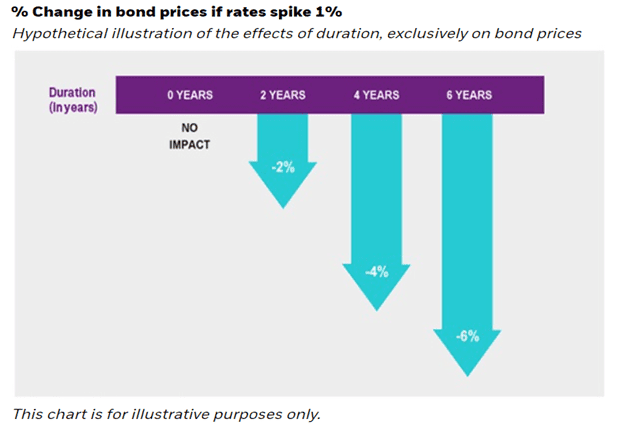 Let’s look at the funds in the chart at the beginning of the article. The Vanguard Total Bond Market Fund (shown in purple) (BND) has a duration of 6.83. You can find this by logging into Schwab, Fidelity, Vanguard or any other of the large custodians and search for the ticker symbol. Thus since interest rates have moved from 1.51% to 2.71% or 1.2%, we would expect the fund to lose about 1.2% x 6.83= 8.2%. The fund is down 7.4% since the start of the year, so it is close to where we could expect it to be based on the change in interest rates. There are other complex factors such as credit quality, etc in play here that we are not going to get into that can cause the calculation to be just a bit different, but, hopefully, you get the point.

Now that you are an expert in the concept of duration, let’s move on to what the future may hold for our bond funds:

It is painful holding bonds lately, but we shouldn’t forget why we hold bonds in the first place. They generally have a low correlation to stocks, so most times when stocks crash, bonds increase in value as investors switch to safer investments. That increase in bond buying pushes yields down because bonds do not need as high an interest rate to attract investors and with the yield or interest rate of the bond falling, the price increases. When rates are higher, they also can produce a nice income stream, although it has been a few years since bond yields really gave us much income.

Thus, for longer term investors, the outlook for bonds and bond funds is a heck of a lot brighter than it was at the beginning of 2022. That isn’t to say that there still isn’t more pain ahead if rates keep rising, but eventually interest rates should stabilize and bonds will be decent contributors to portfolio returns again.