How will it affect me?

Unless you have been living in a cave the last few weeks, you are probably aware that the Federal Reserve (Fed) has finally embarked on the process of raising short-term interest rates (also known as a tightening cycle). Why are they doing this? How will this affect me? What might it do to stocks and bonds? What is the Fed’s longer-term plan? Let’s dig into these questions and see if we can come up with some answers.

Why is the Fed Raising Interest Rates?

There are several reasons:

I saw a good analogy somewhere that combating inflation is similar to treating cancer with chemotherapy in that you have to kill parts of the economy to slow things down and tame inflation. You should also remember that the effects of the interest rate increases take time to ripple through the system and affect the economy, like slow-release medication. Thus, the effects of the Fed raising rates, often takes several months to notice. The Fed is in a precarious situation currently because if it raises rates to fast, it can plunge the economy into a recession, but if they go too slow, inflation can continue to ravage purchasing power. Sometimes, a recession is the cure for high inflation. Also, all things being equal, we should all fear long-term high inflation much more than a recession. The effects of high inflation on purchasing power can be much worse than the effects of a recession. Many financial experts believe that the Fed has waited too long to act on taming inflation and should have started this process last summer and now they have a real problem on their hands. A problem we have not had to face in over 40 years.

What is the Fed’s Plan and How Much are They Planning on Increasing Interest Rates?

The Fed controls short-term interest rates, think up to about 2 years out, while market forces dictate what longer-term rates more than 2 years out will do. So, when you hear that the 10-year Treasury rate is moving up, that is because market forces believe the economy is going to do well in the longer term, and if the 10-year Treasury rate is falling, the market may be anticipating a slowing economy.

This week, the Fed raised its benchmark federal-funds rate (the rate banks charge each other for overnight lending and what eventually gets passed on to consumers and ripples through the system) from a range between 0% and 0.25% to the range between 0.25% and 0.5%. This is what is occurring when you hear that the Fed raised interest rates. Chairman Powell commented that the plan is to raise rates in all 6 of the Fed meetings through the end of the year, which may get short-term rates near 2% if they carry out with their plans the remainder of the year. The last time the Fed started raising rates was late in 2015 through 2018 until the economy started to slow, and they reduced rates somewhat in 2019, and then chopped them to almost zero in the throes of the pandemic in March 2020. Thus, the Fed needs to raise rates to cool off inflation, but if it raises them to high, too quickly, it can cause a recession. 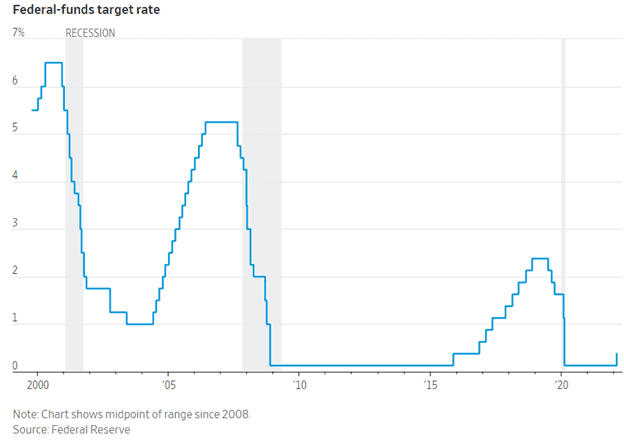 What Things Will Be Affected by The Fed Raising Rates?

Stock & Bond Markets – Most investors believe that rising interest rates cause the stock market to fall, but history shows this is not the case and the last several times the Fed raised rates the stock market was higher a year later.  Bonds usually anticipate rising interest rates and have already factored that into bond prices (Bond prices go down when interest rates go up). Bonds have already factored in rising rates and have been adversely affected over the last year, but ironically, bonds often times stabilize once rates actually rise, because they have already been anticipated by the market. Stock markets can usually do well until the Yield Curve Inverts, (when short-term rates become higher than long-term rates) usually because the Fed raised rates too far, too fast, which is usually a precursor to a recession. Unfortunately, almost every time the Fed embarks on raising rates it does eventually end in a recession. Our fate may be already sealed.

Credit Card Interest – Hopefully, most of my readers do not carry balances on their credit cards, but for the millions of people that do, when the Fed raises rates, credit card rates generally move in lockstep, albeit, at a much higher rate. Credit card rates are almost always a variable rate tied to short-term interest rates.

Generally, when the Fed raises short-term rates it does not directly affect mortgages since these are tied more closely to the rate on the longer-term 10-year Treasury Note. As the 10-year Treasury note yield has risen from about 1.3% last summer to about 2.2% today, mortgage rates have already increased from below 3% last summer to up over 4% currently. When you are locking in a mortgage, it is more important to pay attention to what the 10-year Treasury note is doing rather than if the Fed is raising the short-term rate.

Home Equity Lines of Credit (HELOC’s) are tied to short-term rates, so if you have a HELOC, you will likely be paying higher interest rates soon. Also, if you have an adjustable rate mortgage (ARM), there is a good chance that rate will be rising as well.

Some Student Loans and some private student loans are tied to Fed Funds rates, so depending on how your loan is structured, could start seeing a jump in interest rates. If you have student loans, you will want to investigate if your loan is tied to floating rates and consider refinancing to a locked in rate before rates increase more later in the year.

Auto loans may also move up since car loans are generally tied to shorter-term loans, unlike mortgages, however, that is the least of the concern for new and used car buyers these days as car prices have shot up over the last year and a half due to commodity shortages.

What About Interest on My Savings Accounts at the Bank?

Theoretically, we should start seeing higher interest rates available from banks for savings accounts and Certificates of Deposit (CD’s). But, as we already know, it seems it takes a while for banks to bump rates up when interest rates rise, but they are sure quick to the trigger to drop your interest rate when they are falling. However, if the Fed does manage to raise short-term rates up to around 2% by year-end (from the current 0.25%-0.50%), you should start seeing some increases in your savings rates. Usually, the online banks such as Ally will increase rates faster than the brick and mortar institutions.

Inflation is the biggest enemy to your long-term financial health and that is why the Fed really wants to get inflation to moderate. Did they wait too long to start their battle against inflation? We will see, but they do have their work cut out for them. Eventually, there is a good chance that the Fed will raise rates too far (they have a good history of this), but they may also do that intentionally to actually create a recession. When we have a recession, it leads to falling demand which should in-turn lead to falling prices, and all of a sudden, your inflation problem is solved. Also, recessions are a normal, healthy part of the economic cycle, help flush out the excesses from a booming economy, and prevent bubbles. A recession should be the preferred outcome if we need to choose between long-term rampant inflation and an economic slowdown to cool things off. But, we can always hope for the mythical “soft-landing” where the Fed successfully walks the tightrope and manages to get inflation control without causing a recession. Stay Tuned!